My favourite sporting moment: When Sea The Stars showed us what perfection looks like 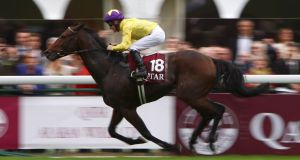 Mick Kinane on board Sea The Stars on the way to winning the 2009 Prix de L’Arc de Triomphe. Photograph: Inpho/Getty Images

The elbow nudge was from the late Seán Mac Connell, this organisation’s former agriculture correspondent. In a logistical ‘Snafu’ the Irish Times was doubly represented at a Monday morning media event in 2009.

“What are we looking at here?” he asked.

“Maybe the nearest thing to perfection we will ever see,” I replied.

Such flourishes aren’t usual for a Curragh stable-yard on a bright October morning. Seán favoured it with one of those glances serious news hacks reserve for over-excited toy department colleagues.

The subject of such overwrought attention stood quietly in front of us, thinking horsey thoughts probably no more monumental than wondering when these bipeds would get lost and he could return to his stable for a lie-down.

Less than 24 hours earlier Sea The Stars had won the Prix de l’Arc de Triomphe in Paris. As he passed the post at Longchamp the BBC commentator Jim McGrath described him as perfection in equine form. I blame Jim for the subsequent flight of verbal fancy.

That Arc was the final chapter of an unprecedented season that saw Sea The Stars unbeaten in six Group One starts over six months. The route he took, including the Derby, 2,000 Guineas and the Eclipse, had never been done before.

Even Nijinsky failed in the Arc. Mill Reef couldn’t win the Guineas. Fate and a shocking ride conspired against Dancing Brave in the Derby. Sea The Stars, however, swept all before him in Europe’s greatest races. It’s a feat that may never be equalled. And he made it look easy.

But there was more to the unprofessional abandonment of scepticism on that Monday morning than just the peerless record. Later Sea The Stars’ trainer John Oxx lent substance to the zeal.

“If you resurrected all the great horses from the past and put them standing up there in front of you, and walked them up and down and looked at them, and at their pedigrees, their performance, their race record, their temperament, their conformation and everything, you’d pick some holes in every horse. But you’d have a difficulty picking a hole with this fellow,” he explained.

“He’s got the pedigree, the looks, that tremendous athletic frame, the temperament and then the record.

The mild-mannered and eminently reasonable figure is no hype merchant. Oxx is more a devotee of the old US racing journalist’s line about nothing you meet on this beat ever justifying a superlative. But even John seemed in awe of his own horse.

Except of course Sea The Stars wasn’t actually his. Instead he carried the colours of the Tsui family from Hong Kong. They bred him from their mare, Urban Sea, who won the Arc herself in 1993, a stunning achievement that pales in comparison to her record as a matriarch.

Eight years before she delivered Sea The Stars, Urban Sea foaled a colt by Sadler’s Wells subsequently named Galileo. He won the Derby and became the world’s most successful sire. Two of her other foals won at the top level before her Cape Cross colt was born at the Irish National Stud in 2006.

It’s not unknown in all sports for people to subsequently claim they knew from the start about an exceptional individual talent. Racing in particular supports various industries built on the hindsight game of pinning inevitability onto outcomes.

The reality though is that history is littered with faded memories of sleek expensive thoroughbreds with perfect bloodlines that walked like Baryshnikov and ran like Boris Johnson. But from when he first appeared as a two-year-old there really did seem to be something different about Sea The Stars.

Even those of us unable to tell a fetlock from a footlocker knew his pedigree was impressive. But it was hard to ignore how otherwise cynical hard-boots made noises about this blue-blood’s potential which suggested something way out of the ordinary could happen in his classic year.

For once the potential was realised and then some. From May through to October the lordly bay creature turned up once a month in the highest company, dismissing his opposition with nonchalant superiority.

It had been over 23 years since Dancing Brave, the last champion European racing could universally acclaim. Even he though failed to completely convince he deserved comparison to other iconic names of the past such as Brigadier Gerard or Sea Bird.

Like any sport racing thrives on its near mythical figures. Flat racing in particular, with commercial imperatives that often make the careers of its leading lights so short, was desperate for a new great to emerge.

When Mick Kinane slipped off Sea The Stars’ back after winning the Derby he whispered to Oxx that this could be one of them. This was from a man who’d ridden Galileo and Montjeu. It was remarkable how quickly public hopes mushroomed about Sea The Stars joining the pantheon.

Racing’s allure can be a mystery to some. It is the ultimate Marmite sport. Those who fall for it fall hard. The magnificent triviality of finding out the best horse in each race can become all-consuming. Finding out the best of all gives it shape, perhaps helping to make sense of the obsession.

No one can definitively acclaim who’s the best ever. Within a year of Sea The Stars retiring to stud a son of Galileo began his own racing career. Frankel wouldn’t be beaten in 14 starts. After two decades of waiting another unequivocally great horse rushed on the scene like a bus running late.

The argument as to which is better is as enduring as it is unanswerable. On handicap figures Frankel is rated superior. His run style helped. A short temperamental fuse meant he ran flamboyantly, winning by large margins. Sea The Stars was more cool, disinclined to do more than necessary.

Kinane still reckons the colt that provided him with a perfect finale to his own groundbreaking career never showed more than 85 per cent of what he had in the locker.

Through the Eclipse, the Juddmonte International and the Irish Champion Stakes at Leopardstown, Sea The Stars never looked less than invulnerable. By the time he got to the Arc practically an entire sport was willing him to win and confirm what he hoped – that we were witnessing the real deal.

It meant there was no doubt the morning after Paris. Leonard Cohen wrote about forgetting your perfect offering because there’s a crack in everything. But through six months of 2009 one of the thoroughbred species came as close to flesh and blood perfection as seemed to make no difference.

For those of us who see beauty and grace in the sight of a galloping racehorse that means something.

For others such claims sound hopelessly extravagant even if on that morning Seán was much too gracious to say so. Maybe he just pondered how sports hacks affect to put so much significance onto things so comparatively incidental. Now more than ever it can seem self-indulgent.

But somehow the memory of that Monday morning feels like even more of a privilege more than a decade later.