Dundalk’s €2.5m resurfacing on schedule to finish in June 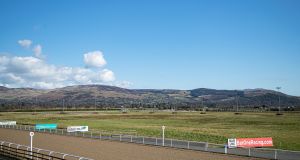 The resurfacing of Dundalk racecourse is set to be completed by June on schedule. Photograph: Tommy Dickson/Inpho

A near €2.5 million resurfacing of Dundalk’s all-weather circuit is still on schedule to finish in June with the track likely to be ready to facilitate any extension of the 2020 flat season into the winter.

With racing cancelled due to the coronavirus pandemic, and the government ban on sport likely to extend beyond the current April 19th deadline, there have been calls for the flat season to extend into December to allow as much of the programme to eventually be run.

Racing stopped in Ireland the day after the opening of the flat season on turf at Naas. When the sport resumes it will do so with four weeks of flat racing, most likely behind closed doors. However a considerable chunk of the programme is likely to have been lost by the time that happens.

That has led for calls from leading figures such as John Oxx to extend the flat season into the winter to make up as much of that as possible and if ground conditions turn very soft the opportunity to run valuable races on Dundalk’s new Polytrack surface should be taken up.

Last year widespread dissatisfaction with the artificial surface, which is a mix of synthetic fibres, rubber, sand and wax, led to provision for it to be ripped up this summer. Despite the Covid-19 crisis those plans are on schedule.

“The original schedule was work would commence after our last meeting on April 22nd with work completed by June 15th. As things stand that is still the situation.

“The manufacturer is making the surface and in fact the first load is due to come from the port of Liverpool to Dundalk in the coming week,” the track’s chief executive, Jim Martin, said on Sunday.

“There’s no building involved. It’s like someone goes out and cuts the home straight at the Curragh or Leopardstown. This is just going out and taking material off.

“Obviously everything changes if the government locks down things further. But you’re talking about three or four people operating on a 150 acre site . It’s like any other racecourse. It’s part of a maintenance regime that needs to be carried out,” he added.

All of racing is waiting on a possible date for the sport to start again as the Covid-19 crisis continues with stringent restrictions applying on both events and movement.

British racing still hopes to resume in some form on May 1st although a similar date here looks optimistic.

Martin underlined however that even if the sport could start again next month, Dundalk will not be able to host any fixtures.

“Our track will be out of bounds in May for the work to carry on. We can’t stop the process once it is started,” he said.

“It is important for us to have the track finished on schedule. We’re on schedule to have it finished by June 15th, leaving it free for our first fixture on the list that exists which is July 12th,” Martin added.

The longer racing is cancelled the bigger the changes to a revamped 2020 fixture list however and the real value of a new Polytrack surface at Dundalk could come later in the year.

“I saw Eddie O’Leary (Gigginstown Stud spokesman) being quoted that if we have to run the Derby at Dundalk for one year, what of it. I thought to myself ‘fair play to Eddie!” Martin said.

John Oxx has said that plenty of use could be made of Dundalk if turf fixtures can’t be fitted into any new programme, especially in light of a new Polytrack being put in.

“If there was a time of year which needed us to race three times a week to give opportunities to the flat population in the period of October, November, December, and if that was what was wanted by the industry, the facility is here to do that, no problem,” Martin said.

“You’re still dealing with Irish weather so who knows? It’s good to extend the flat season, I understand that. We all remember October, November, December when ground is like a bog so you just don’t know.

“It could be dry until Christmas but it could be a bog in October too,” he added.