Spike in horseracing positive drug tests due to ‘lack of understanding, not doping’ 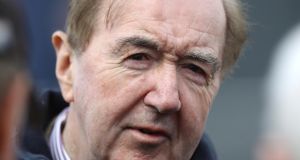 Irish racing’s head of anti-doping believes there’s nothing sinister behind a spike of positive drug tests which this week saw five more winners being disqualified.

The Irish Horseracing Regulatory Board confirmed the five were the Gordon Elliott-trained Midlands Grand National winner Timiyan, who tested positive for an anti-inflammatory, and Dermot Weld’s Curragh winner Kisanga which had a positive test for testosterone.

That brought the total of winners disqualified so far in 2018 to eight with four others in point to points. There have been 21 positive tests overall and seven more cases are believed to be in the pipeline. There were five positives in each of the two previous years.

However the IHRB’ head of anti-doping, Dr Lynn Hillyer, has said she is more reassured than alarmed by the trend.

“What we’re finding in extremely thorough investigations of these cases is a lack of understanding and, if anything, slightly nudging sharp practise. But not doping. And there’s a big difference between the two.

“When I began the job two years ago I said I didn’t believe there was an issue but that we didn’t know. We do know what we have for the total of testing so far, and right here, right now, I’m reassured by these cases rather than concerned.

“No one wants to make the headlines. But look at the detail of the cases and they are more reassuring than they might seem,” Hillyer said on Friday.

During the summer other IHRB officials described the spike as being down to medical “bad practise” in relation to supplements and anti-inflammatory products rather than more serious substances such as steroids.

It has put in place a series of seminars to educate industry professionals, the second of which takes place on Wednesday.

On Friday the chief executive of the trainers association also said he didn’t believe there’s anything more disturbing behind the greater rate of positive drug tests.

“There seems to be a change of some sort that is catching trainers out,” Michael Grassick said. “I don’t know whether it is coincidence because of a change of laboratories. They way I look at it trainers are creatures of habit. I don’t think they’ve all changed their training methods.”

An internal IHRB review is under way into the regulatory body’s decision in February to end its 22-year link to the Limerick based laboratory, BHP. Since then testing has been carried out in England and in France on an interim basis.

Tenders to provide a new testing service for Irish racing will be considered in the coming weeks with a new laboratory possibly being officially appointed as early as next month.

However Hillyer stressed on Friday there was no link between the decision to change labs and a false positive test for an anabolic steroid which was revealed earlier this year.

Asked what may have changed in 2018 she said: “”We do have a change of laboratory. We do have a more proactive approach to investigations. We do have a very rapid disciplinary process which means results are considered in the right timescale. So all that has changed.”

In other news the ante-post favourite Son Of Rest is on course to try and become the first Irish trained winner of Saturday’s Ayr Gold Cup.

Fozzy Stack’s runner is officially 10lbs ahead of the handicapper for the historic sprint having been left unchanged after a career best effort in last Sunday’s Flying Five. Son Of Rest was runner up to Havana Grey at the Curragh.

The third and fourth, Sioux Nation and Hit The Bid, try their luck at Newbury in a Group Three while The Irish Rover goes for Aidan O’Brien in the Mill Reef Stakes.

1 Madigan’s primary goal is Ireland caps after switch to Ulster
2 View from Melbourne: Sporting fabric of the city suffering from second lockdown
3 Exiled Seán O’Brien not ruling out a third Lions tour
4 Seán Moran: It won’t take much before cancelling All-Ireland looks like a solution
5 Gerry Thornley: World Rugby’s problem is that refereeing is not an attractive career path
Real news has value SUBSCRIBE