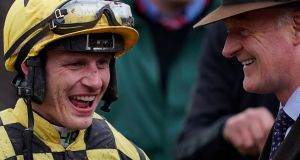 Gold Cup-winning jockey Paul Townend recorded his maiden 100th winner of the season in Ireland as the well-touted Annamix scored for the first time at Clonmel.

Willie Mullins’ six-year-old, formerly an ante-post favourite for the Supreme Novices’ Hurdle, never made it to the Cheltenham Festival after failing by two and three-quarter lengths to justify short odds on his stable debut at Limerick just after Christmas.

But Annamix made no mistake at his second attempt for the champion trainer, winning by a length and a half in the Goatenbridge Maiden Hurdle which opened Tuesday’s card.

Annamix was again sent off odds on, 4-6 as last time, but second-favourite Raya Time appeared to be equally well-backed as race time approached.

As the market strongly suggested,the two greys had the two-mile contest between them — clear of the field throughout.

Rachael Blackmore, Townend’s closest challenger in this season’s title race, had Raya Time in front in a first-time hood.

Henry de Bromhead’s novice pulled hard, though, and made one significant mistake in the back straight.

It was therefore no surprise when Annamix, himself wearing a tongue strap for the first time, jumped into a narrow lead at the second-last and stayed on to win in the famous colours of Susannah Ricci, despite an awkward mistake at the final flight.

Mullins was full of praise for Townend as he congratulated him on reaching his century in a season for the first time.

“It is a wonderful performance by Paul — and I hope he will add a few more before the end of the season,” he said.

“He and Rachael have lit up the National Hunt season, and hopefully Rachael can also ride 100 winners late this season.”

He added of the winner: “I didn’t think I’d be going to Clonmel to break that fella’s (Annamix) duck, and we’ll look at a race wherever we can find one before the end of the season.

“I was keen to go novice chasing with him next season, and that’s why I said we may and try to win a hurdle race with him.

“He has been long enough trying to win a maiden hurdle, and hopefully now we will get him over fences.”