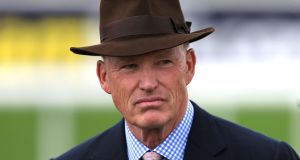 Comments made by Nick Rust in a discussion of racing’s equine welfare policies have been described as “extremely unwise” by the leading trainer John Gosden.

During a media event at his stable to promote the Weatherbys Hamilton Stayers’ Million, Gosden did not refer to the chief executive of the British Horseracing Authority by name but criticised a line of argument he made during last week’s appearance on Racing TV, when Rust suggested racing risked finding itself in a similar situation to fox hunting.

“I don’t think it’s wise to use blood sports as an analogy for horse racing,” Gosden said. “I think that is extremely unwise and makes no sense. There’s a lot of love and care for these horses and if anything ever happens to one of them, it’s devastating for us. I’ve had horses happily out in a field and something can happen when they’re running around on their own. They’re athletes and, you ask any football manager, athletes get injuries. I think we need a little more common sense spoken. That would help everybody.”

During his appearance on Luck On Sunday, Rust explained his approach to the topic of welfare by saying: “I’m looking at the lessons of history. Hunting, coursing, circuses, sea life, dolphins, it’s all changing and they didn’t move with it in time. I want to stay ahead of it by robustly arguing as a sport that we are doing all we can to manage avoidable risk.” Rust made no effort to distinguish between horse racing and hunting until his interviewer suggested the comparison was hardly apt.

While Gosden did not name Rust, he praised the words of Rust’s predecessor, Paul Bittar, who said on Sunday that British horse racing is in “rude health” and should be doing more to emphasise the positive stories it has to tell. “There’s some very good things in this industry,” said Gosden, after citing Bittar’s intervention.

“I think we need to be a little bit careful. You have got to be clear that this is a great industry. We do lead the world in Flat racing on turf and the best horses are here. You’ve got to be very proud of the racing we have here and we also have the best jumps racing in the world, in England, Ireland and France, it just stands out. Of course you have to look at all welfare issues, which we always have done.

“I’m a little concerned there seems to be such a chasm between the horse people and the BHA at the moment. We’re going to have meetings, everyone needs to sit down and talk some bloody sense.”

Gosden made his comments while promoting the £1m bonus being offered for any horse that can win a series of marathon races this summer, his Stradivarius having landed the bonus when it was first offered by the insurance broker Weatherbys Hamilton last year. For this season, the series has been expanded so the winners of eight initial races around Europe can then hope to land the £1m if they follow up in the Gold Cup at Royal Ascot, the Goodwood Cup and the Lonsdale Cup.

“It’ll be quite a ding-dong,” said Gosden, who will try to win another £1m with Stradivarius. The chestnut was so fresh that he reared up while posing for photographs, causing Frankie Dettori to duck behind the trainer for protection. “He’s been in great form, been eating really well, had a great winter,” Gosden said, unruffled. “We’re aiming him at the Yorkshire Cup.” - Guardian