New whip regulations for jockeys to be stressed before upcoming festivals 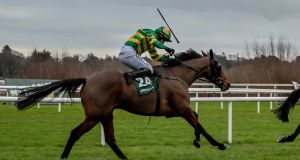 Donal McInerney on Auvergnat loses his whip on the way to winning the Paddy Power Steeplechase at Leopardstown in December. Photograph: Morgan Treacy/Inpho

Irish racing’s new whip regulations will be highlighted to jockeys ahead of next month’s high-profile festival fixtures at Fairyhouse and Punchestown.

The €500,000 Boylesports Irish Grand National is the centrepiece of Fairyhouse’s Easter festival which begins on April 21st while just over a week later in excess of €3 million in prizemoney will be on offer during five days at Punchestown.

Expanded welfare measures brought in by the British Horseracing Authority ahead of Cheltenham earlier this month created huge controversy, particularly in relation to rules requiring tired horses to be pulled up.

A ten-day ban given to Irish amateur Declan Lavery after finishing third in the National Hut Chase provoked widespread criticism of the BHA and Lavery successfully appealed the suspension last week.

The BHA has deliberately focused on high-profile fixtures such as Cheltenham and the upcoming Aintree Grand National meeting because of the extra public attention on them.

The Irish Horseracing Regulatory Board has said it won’t introduce additional welfare steps ahead of big festivals here because it doesn’t believe jockeys not pulling up horses that should be pulled up is an issue in Ireland.

However new whip regulations which will trigger an automatic stewards enquiry if a jockeys uses a whip nine times or more on a horse are already proving controversial here.

Top jumps jockey Ruby Walsh has described them as regressive while former champion flat jockey Johnny Murtagh has said setting a number on the matter ties the hands of stewards.

The Irish Jockeys Association secretary Andrew Coonan also described the new rules, which are due to come into force on April 9th, less than a fortnight before Fairyhouse, as evidence of a “lack of enlightened thinking” from the IHRB.

The IHRB’s chief executive defended the new regulations on Sunday and confirmed that all riders will start with a clean record on the whip from April 9th.

“When the new rules come in all riders will be starting with a clean record. We’re wiping the slate clean. A rider could have three breaches in the last 12 months and might offend a fourth time which means an automatic send-on to the referrals committee.

“But the directors [of the IHRB] have agreed that every rider starts with a clean record for the whip,” Denis Egan said.

He said: “No, I don’t believe so. In fact one leading trainer came to me yesterday and said this was the right thing to do.”

Egan added: “The IHRB position for high-profile meetings is exactly the same as smaller meetings. We won’t be issuing any additional guidance or anything like that.

“But one thing we will be drawing riders attention to ahead of these meetings is the whip rules in relation to frequency which is eight strokes. That’s the only point, to ensure jockeys don’t inadvertently break the rules.”

The IHRB’s chief executive defended the regulatory body’s decision to set a figure that will automatically trigger an enquiry and denied that stewards’ discretion was being removed.

“The directors, when making the rule, were cognisant of what’s happening elsewhere in the world but at the same time they put in a solution which they felt was appropriate for Irish racing.

“For example in Germany the number of hits allowed is five. It’s something similar in France. England has its regulations. We feel nine to trigger an enquiry is an appropriate figure for Ireland.

“What has been missed in all this is that stewards still have discretion. They will call an enquiry if the whip is used nine times or more. But it doesn’t mean an automatic penalty. It depends on how the whip is used and in what circumstances.

“All anyone seems to be talking about is eight is the limit. But you could break the rules in three hits if you hit a horse three times and not give time to respond.

“It very much depends on how it happens. If a horse is going to run out past the stands and you hit him three times to get him back into the race, and then you hit eight on the run-in, it’s highly unlikely you’ll be done for frequency,” Egan said.

He rejected any suggestion that a 26 per cent increase in breaches of the whip rules last year was down to a change in policing policy rather than rider behaviour.

“We have to take cognisance of what’s happening across the world and we also have to apply what we feel is the right thing to do for Irish racing. We knew in the middle of last year there was a problem. We brought the jockeys in and showed them on a month by month basis how things were getting worse.

“We told them if things didn’t improve we’d have to take action because we can’t stand over a situation where the number of whip rule breaches has almost doubled in the last five years,” Egan added.

3 Hotel quarantine ‘would be incredibly tough’ on amateur Ireland players