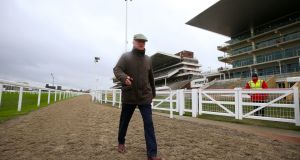 Willie Mullins believes the penalties handed out to jockeys by the British Horseracing Authority after Cheltenham’s National Hunt Chase on Tuesday were an overreaction and intended to appease animal welfare groups.

The champion trainer’s comments come after confirmation that Declan Lavery, the amateur jockey who became the focal point of last week’s welfare controversy at the festival, will appeal a 10 day ban at BHA headquarters in London on Thursday.

The Irish rider was suspended for failing to pull up the JP McManus-owned Jerrysback who finished third behind Le Breuil in Tuesday’s four-mile National Hunt Chase.

Lavery was one of three Irish jockeys – along with Rob James and Noel McParlan – who collected 37 days of suspensions between them after the race.

It was Lavery’s case that drew particular attention with former champion jockey AP McCoy slamming the BHA for what he described as the worst decision he has seen in 25 years at Cheltenham.

McCoy also said he was embarrassed for the BHA who imposed the penalty on Lavery for continuing in the race when it appeared contrary to the horse’s welfare after tired jumping errors at the final two fences.

Mullins, the most successful trainer in Cheltenham festival history, and who finally won a first Gold Cup with Al Boum Photo on Friday, believes the BHA got it wrong. He also said he hopes the historic four mile race itself doesn’t suffer as result.

“I think they (the BHA) obviously overreacted with the riders. The first pair were locked in battle, so were the second pair, and everyone else pulled up.

“I thought they overreacted and I thought that was done more for the animal welfare people. I think the jockeys suffered because of the authorities trying to appease them by putting the bans on the jockeys.

“If these guys had pulled up they could have been in for not trying when obviously the horses were able to finish,” he said on Sunday.

“The race is going to come in for a lot of criticism now, and I think unfairly. I think its position in the card had a huge bearing on it.

“It suffers from the position it’s in. If you get bad weather then ground that has been used all day is at its worst for the last race. And that’s the longest race. That’s not fair on the race, the horses or the riders.

“Possibly it should be run on fresh ground earlier on the day. It’s positioning means it gets the worse of the ground and that needs to be looked at.

“It’s the oldest race at the festival. It used to be the feature, the Gold Cup for want of a better word, and I would hate to see it taken away,” Mullins added.

The Irish Jockeys Association has described the BHA stance on pulling up tired horses as “illogical” given the requirement on riders to also try and achieve their best possible position in a race.

The enquiry into Tuesday’s race didn’t finish until two days later when another jockey, Damien Skehan, who rode the fourth horse, Clondaw Cian, was cleared of breaking any rules in relation to continuing in the race contrary to the horse’s welfare.

That finding could play a role in Lavery’s appeal later this week when he appears before a BHA panel in London.

Solicitor Andrew Coonan, who is also secretary of the Irish Jockeys Association, will represent the rider.

“I think the purpose of an appeal is to allow everyone the chance to take a second look at this,” Coonans said on Sunday.

“I think when one takes a reasoned view on it, and look at all the circumstances, including how the rider of the fourth horse who was also questioned about his riding actions, and was cleared of any wrongdoing, I think there are obvious and clear grounds for an appeal.

“I think in these particular circumstances the 10 day penalty was not merited,” he added.

On Sunday Willie Mullins also expressed his relief that pre-festival fears about widespread withdrawals due to passport and documentation irregularities were largely unfounded.

Vaccination measures brought in on the back of last month’s outbreak of equine influenza meant more documentation was required for horses to be able to run at Cheltenham.

“The hoops and loops trainers had to jump through having a runner in Cheltenham meant a huge amount of bureaucracy and red tape.

“I think it’s just something we’ll all have to get used to and I imagine it’s a good thing,” Mullins said.