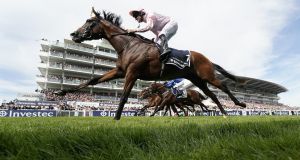 Anthony Van Dyck is one of 10 horses trained by Aidan and Joseph O’Brien that have been tested in Australia. Photograph: Alan Crowhurst/Getty Images

Aidan O’Brien’s Ballydoyle team could return to action on Wednesday with a string of potential Group One starters also in the running to appear at Newmarket later this week.

O’Brien and his sons, Joseph and Donnacha, were dramatically forced to withdraw their intended runners from Sunday’s Prix de l’Arc de Triomphe programme due to contaminated feed.

Urine samples sent to a laboratory in France returned positive results for the prohibited substance Zilpaterol which has been linked to a contaminated batch of feed from the Gain Equine Nutrition firm.

Although there have been no positive test results for Gain products in Ireland or Britain, and any contaminant could have cleared the horses systems by race-time, the O’Briens withdrew their runners from Longchamp on Sunday to protect the integrity of racing.

All three trainers had used Gain products but switched to other feed once news of the contamination emerged last week.

O’Brien Snr has said that daily samples continue to be taken and examined by the lab in France while he and his sons hope to be able to have runners again as quickly as possible.

They have all made declarations for Navan on Wednesday with O’Brien Snr planning to run the two-year-old National Ballet in a maiden.at

Donnacha O’Brien has declared Emporio for the same race while his brother Joseph has made two declarations for Navan and another for Wednesday’s National Hunt card at Galway.

"We've declared the horses for Wednesday and we've sent off blood and urine tests for them. We will get the results of them on Tuesday night," said O'Brien on Monday. "They are saying that after four to five days they (the tests) should be clear."

The scale of the problem has even stretched to Australia where 10 horses trained by Aidan and Joseph O’Brien have been tested for Zilpaterol by Racing Victoria (RV) officials.

The 10 horses, among them the 2019 Derby hero Anthony Van Dyck, have been sent to Australia for events at the prestigious spring carnival including next month’s Melbourne Cup. They are stabled at the Werribee international horse centre.

“Following discussions with the O’Brien stables, RV stewards have today conducted out of competition testing on their horses at Werribee to determine whether Zilpaterol is currently in any of the horse’s systems. The results of these tests may take up to one week.

“Furthermore, both stables have confirmed to RV stewards today that they have ceased using feed from the provider in question.

“RV stewards will continue to work with the O’Brien stables regarding the situation and will make a further comment once the result of the out of competition tests are known and the stables have been notified,” a statement from Racing Victoria said.

It added: “Zilpaterol is classified as a beta-agonist. Beta-agonists such as the commonly used Clenbuterol are medications that primarily have an effect on an animal’s breathing.

“They are permitted for therapeutic use but are a prohibited substance in a horse’s system on race-day.

Continued uncertainty surrounding the issue is reflected closer to home in betting on Newmarket’s Group One action later this week, including Friday’s Bet 365 Fillies’ Mile.

Joseph O’Brien was forced to pull Pretty Gorgeous out of Sunday’s Prix Marcel Boussac but the filly could clash with her old rival Shale, trained by Donnacha, who beat her in last month’s Moyglare.

Santa Barbara tops a half-dozen strong Ballydoyle entry for that race and O’Brien Snr also has a strong team to pick from in Saturday’s Darley Dewhurst Stakes if able to compete.

They include Battleground, who was a late absentee from last month’s National Stakes due to coughing.

In his absence his two stable companions, St Marks Basilica and Wembley, chased home the unbeaten Thunder Moon. All three feature among 18 entries left in the Dewhurst on Monday.

Thunder Moon is among the favourites to score for Joseph O’Brien in a race he won as a jockey in 2013 on board War Command.

Richard Hannon’s Champagne Stakes winner Chindit tops some ante-post lists at 5-2 while the Mill Reef scorer, Alkumail, has been supplemented into England’s most prestigious two-year-old contest.

Hannon also hopes to be represented by Etonian in the Dewhurst although it is Chindit who appears to be really impressing the English trainer. He reported the colt did “one of the best pieces of work we have seen at Herridge for a lot of years” last week.

Hannon said: “He worked with two horses rated 100, good handicappers, both five-year-olds, and worked extremely well for a two-year-old. Not many two-year-olds could go with them and he moved great.

“I am very happy with both of them going into the race, particularly Chindit. His bit of work was pretty spectacular. I don’t think either of them are ground dependant. I think they will both go on soft ground.”