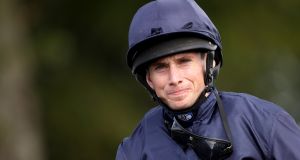 Ryan Moore is set for a Saturday dash between Doncaster’s William Hill St Leger and the QIPCO Irish Champion Stakes at Leopardstown.

There are three hours between the “off” time for the world’s oldest classic in Yorkshire and the start of the €1.25 million highlight of “Irish Champions Weekend” at the Dublin track.

Moore is likely to team up with the current Leger favourite Kew Gardens before flying the near 220 miles to ride another star Aidan O’Brien-trained three year old, Saxon Warrior, in the Champion Stakes.

Taking in the two Group One races was successfully managed by James Doyle in 2014 and Moore is set to do the same with O’Brien confirming: “That’s the plan at the moment.”

It will be the first time the English jockey has shuffled the two meetings. Moore was at Leopardstown for the first three years of Irish Champions Weekend when it clashed with the Doncaster Leger.

Last year the Leger took place a week later and Moore completed his set of English classics when Capri won at Doncaster.

Kew Gardens is among seven O’Brien-trained entries left in the Leger after the five-day stage. The Grand Prix de Paris winner is joined among the acceptors by Flag of Honour who is favourite in many lists for the following day’s Comer Group Irish Leger at the Curragh.

Opposition to Ballydoyle at Doncaster could yet include the impressive Galtres winner Lah Ti Dar and Joseph O’Brien’s Latrobe who figure among 16 horses remaining in the Leger.

O’Brien has confirmed Saxon Warrior an intended starter in the Champion Stakes as he pursues an eighth win in the race. The last of his seven winners was So You Think in 2011.

Whether or not Moore will be able to ride in Saturday’s other Group One at Leopardstown, the Coolmore Fastnet Rock Matron Stakes, is uncertain. That race is due to start at 5.25pm and looks to be dominated by the heavy odds-on favourite Alpha Centauri.

Ground conditions at Leopardstown are currently good-to-firm but outbreaks of rain are expected through Tuesday and Wednesday.

The 5-4 ante-post favourite for the Champion Stakes, Roaring Lion, likes quick going but David Redvers, racing manager to Qatar Racing, said on Monday: “Everything is set fair and the plan is very much to run.”

The going at the Curragh for Sunday’s second-leg of Champions Weekend is good on the round course and yielding on the straight.

Local trainer Patrick Prendergast hopes those conditions don’t deteriorate too much before the weekend as he aims to run his Debutante Stakes winner Skitter Scatter in the Moyglare on Sunday.

“I’d be happy to take a chance on soft. Heavy would scare me a bit. She’s very honest and while a lot of horses, when the ground doesn’t suit, throw in the towel, she wouldn’t throw in the towel. So that’s why I’d worry about heavy ground,” he said.

“She deserves her place. I felt all year she was underestimated but there’s no accounting for attitudes and guts and she has that in spadefuls,” Prendergast added.

One filly who will miss the Moyglare however is the Prix Morny heroine Pretty Pollyanna. Michael Bell’s filly will instead wait for the Cheveley Park Stakes at her local track in Newmarket.

“It was going to be a little bit complicated getting her out to Ireland and they had a lot of rain on Saturday morning,” said her joint-owner Tim Gredley. “The travelling can take a lot out of them and if we were unlucky with the ground it puts you on the back foot. The Cheveley Park is on our doorstep.”

A fifth Group One in a row for Alpha Centauri is Jessica Harrington’s ‘Irish Champions Weekend’ focus although a win for Rovetta in Listowel’s Day Three festival feature will be a timely boost in the meantime.

Rovetta can’t live up to the same billing as her stable companion but she goes into the €55,000 Lartigue Hurdle on her own winning roll having won her last three starts.

A 33-1 winner on her first handicap start over flights at the Galway she has subsequently won twice on the flat and with a 10.4 featherweight on her back could be tough to beat.

1 Trump in the rough over playing golf and US Covid-19 fatalities
2 Suarez’ Italian language exam rigged according to prosecutors
3 Awarding of 2023 Rugby World Cup to France part of Laporte investigation
4 What next for green jersey hero Sam Bennett after toughest of Tours?
5 Gerry Thornley: Talk of Anglo-French hegemony is over the top
Real news has value SUBSCRIBE

Class tells for Lady Wannabe with success at Listowel 18:37
Donegal SFC final postponed until October 7th over coronavirus concerns 18:28
Trump in the rough over playing golf and US Covid-19 fatalities 18:12
Tottenham’s Carabao Cup tie at Leyton Orient off but no decision on walkover 17:45
Digital passport system could ensure horse movements if Brexit deal agreed 15:45
Here is your handy guide to sport on television this week