Mount of Jonathan Moore beat a field of 18 runners to the €200,000 feature in Listowel 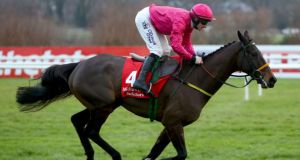 Snow Falcon clung on grimly to claim top honours in a thrilling renewal of the Guinness Kerry National at Listowel.

A field of 18 runners went to post for the €200,000 feature and for a long way it looked like the heavily backed Rogue Angel would provide Gordon Elliott and Gigginstown House Stud with a third successive victory.

Originally a reserve before eventually making the cut, the 7-2 favourite travelled with exuberance and fenced fluently under Rachael Blackmore and had opened up a big advantage over the rest of the field at the halfway stage.

However, his lead was steadily reduced and it was clear from the home turn he would have to settle for minor honours.

Noel Meade’s Snow Falcon, last seen finishing fourth in the Galway Plate, was a 6-1 shot under Jonathan Moore and was travelling strongly at the top of the straight.

The Willie Mullins-trained Saturnas gradually closed the gap and was rattling home after the final fence, but Snow Falcon had just enough in reserve to score by a neck.

Rogue Angel was third, with Dell’ Arca faring best of the British challengers in fourth.

Meade said: “Everything went great for him through the race and I’d say he was idling in front more than anything else.

“We planned to jump off on the inside and let him drift back as we knew there would be plenty of pace. He rode exactly as we planned, except he went on a bit earlier than I expected, but he said he didn’t want to stay with Rogue Angel and help him along. He wanted to pass him and put it to bed.

“He trained very well since Galway and I felt the ground helped him as he was a bit at sea on the faster ground at Galway. He’s not an extravagant jumper over fences, but he’s usually reasonable.

“It’s a great race to win. I’ve had plenty of big-race winners here before, but not the Kerry National.

“He could go for the Ladbrokes Trophy at Newbury (on December 1st) and the Munster National is a possibility as well.”

Johnny Murtagh to train for the Aga Khan in Ireland 16:40
Salwa Eid Naser cleared of anti-doping violation by World Athletics 16:38
Longford hand Cork a walkover in final Division 3 match 15:57
Johnny Sexton aware of how Ireland can offer fans an escape 15:34
Jason Holder ‘disappointed’ in Australia and Pakistan for not taking the knee 13:17
Here is your handy guide to sport on television this week