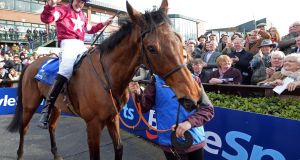 Rachael Blackmore will try to maintain a Guinness Kerry National-winning streak for female jockeys by teaming up with the Michael O’Leary-owned Rogue Angel in Listowel’s festival feature on Wednesday.

The season’s leading rider has been declared to ride the 2015 winner who is first reserve for the €200,000 highlight and needs one of the 18 runners to drop out to be guaranteed a start.

However, one of the 18 is the outsider Wounded Warrior – also owned by O’Leary’s Gigginstown Stud team – who is unlikely to take up the engagement.

All three reserves for the Kerry National are owned by Gigginstown who are bidding to win the race for a fourth year in a row.

All Hell Let Loose is second reserve and Eddie O’Leary indicated that if he gets a run he will be ridden by Lisa O’Neill who has won the race for O’Leary in the last two years on board Potters Point and Wrath Of Titans.

It means Irish racing’s ‘Reserve’ system could once again play a significant role on the eve of one of the most high-profile steeplechase prizes of the year.

Under current rules, the Kerry National’s final line-up may not be known until 90 minutes before the first race at the meeting which is off at 2.05.

That state of affairs is being examined by the Irish Horseracing Regulatory Board which has invited submissions from various industry stakeholders on the matter.

It’s a move taken on the back of last month’s Galway Plate when the Willie Mullins trained ante-post favourite Patricks Park was first reserve and got in when his stable companion Ballycasey was declared a non-runner less than two hours before racing began.

Five years previously the JP McManus-owned Carlingford Lough famously won the Plate from first-reserve after another McManus owned runner was declared a non-runner on the eve of the race.

However Eddie O’Leary defended the Irish system on Tuesday and contrasted it with the Aintree Grand National in which reserves can’t get in after a one o’clock deadline the day before the race.

“The reserve system in Ireland is far better than the carry-on in England. Reserves are there to ensure full fields. Last year, with the English system, you ended up with two non-runners in the Aintree National which to me is very unsatisfactory,” he said.

A reserve system is used much more widely in Ireland and Gigginstown’s hat-trick was preceded by a different kind of Kerry National three-in-a-row when the race was won from 2012 to 2014 by horses promoted from the reserves. Katie Walsh rode the 2014 winner Your Busy.

Rogue Angel won a year later for Mouse Morris but is set to have his second start for Gordon Elliott off the bottom of the handicap.

It would be the most valuable victory of Blackmore’s career if he wins although Wounded Warrior’s stable companion Snow Falcon could be a problem. The former high class hurdler finished fourth in the Plate despite being hampered at the fifth and surviving a bad mistake at the sixth.