Blackmore and Frost to fight out Ryanair Chase 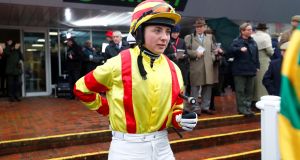 Jockeys Rachael Blackmore and Bryony Frost have ensured their careers aren’t defined by gender but should they fight out the finish of Thursday’s Ryanair Chase there will inevitably be a wider significance attached.

Walsh and Carberry were professional riders in all but name in a race confined to amateurs.

No such distinction applies to Thursday’s most valuable Grade One highlight. It features elite professionals such as Ruby Walsh and Davy Russell who have won the Ryanair five times between them.

It’s no stretch however to suggest that the finish of one of the most valuable top-flight races on the calendar could wind up between the two top female pros on either side of the Irish Sea. Frost is on the prolific Frodon while Blackmore’s mount Monalee could start favourite.

Blackmore broke her festival duck on A Plus Tard here on Tuesday, another step on the remarkable rise to stardom for a rider who is still battling it out for Ireland’s jockeys championship with 84 winners this season.

They’re the sort of statistics that once would have seemed unimaginable at the top of the toughest professional game of all.

Yet the scale of both women’s achievements mean they line up in the Ryanair with surely not even the most chauvinist punter taking their sex into account.

Frost’s handling of Frodon is generally regarded as having been the making of the horse. The partnership has gelled to the extent that a tilt at Friday’s Gold Cup was seriously considered by trainer Paul Nicholls. Ultimately though a Ryanair on soft ground looks the right call.

The same can be said for Monalee who was partnered by Blackmore for the first time on his last start at Gowran, putting up a notably smooth display.

Trainer Henry De Bromhead considered a Gold Cup attempt too but the going might well have stretched Monalee’s stamina. So instead he joins his stable companion, and last year’s winner, Balko Des Flos in the shorter race instead.

De Bromhead has a third contender in Sub Lieutenant and ranged against them all is the formidable Willie Mullins pair of Un De Sceaux and Footpad.

The latter’s season has been frustrating whereas the going could be right up the veteran Un De Sceaux’s street. The 2017 Ryanair winner is a festival stalwart and Mullins has reported Un De Sceaux to be hitting peak form at the right time.

Monalee however should be approaching his career peak and can emerge as best of the Irish. Frodon’s course pedigree makes him the most likely English -trained winner.

The best result might already be in the bag however, in that there’s Anglo-Irish consensus on the sex of their jockeys being irrelevant.

Blackmore also looks to have a good chance in the Grade Two mares novice hurdle where she teams up with De Bromhead’s Sinoria. Her more high profile stable companion Honeysuckle has had to skip the race through injury but Sinoria looks a worthy sub.

There was plenty to like about the way she rallied to beat the subsequent Grade Two winner Chosen Mate at Punchestown last month. It’s the sort of attitude likely to test any chinks in the free-running Epatante.

The card’s opening Grade One is the JLT Novice Chase in which it’s hard to get away from Defi Du Seuil’s claims to a second festival success.

The 2017 Triumph Hurdle hero has bounced back to something like his best over fences this season and although his victory over Lostintranslation at Sandown was by a narrow margin it also looked decisive.

Jockey Rob James had a memorable Tuesday here for all the wrong reasons when emerging from the National Hunt Chase with 19 days’ worth of suspensions.

His date with Out Sam, one of four Gordon Elliott contenders in the Kim Muir, can prove a much happier experience.