Cheltenham confirm Day Two of Festival will go ahead 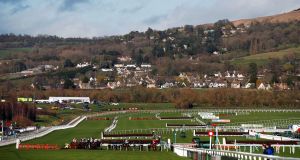 Wednesday’s card at Cheltenham will go ahead. Photograph: Eddie Keogh/Reuters

Cheltenham have confirmed Day Two of the Festival will go ahead as planned, despite fears it would be postponed due to the weather.

Forecasted winds of 80km/h on Wednesday had led to suggestion the day’s card, which includes the Champion Chase, could would be pushed back to Saturday.

However, on Wednesday morning Cheltenham Racecourse released a statement saying the strength of the forecasted winds had moderated, allowing racnig to go ahead.

Simon Claisse, clerk of the course, said: “We’re delighted that the weather conditions have changed from the initial forecasts and the prospect of higher wind speeds and gusts have receded.

“We’re looking forward to a fantastic day’s racing on the old course with the feature race the £400,000 Betway Queen Mother Champion Chase.”