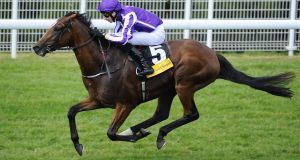 Highland Reel: “When he gets in the lead in these mile and a half races he is difficult to stop,” says Ryan Moore. Photograph: Alan Crowhurst/Getty Images

The start of Ireland’s 2017 turf flat campaign is, as usual, wedged between Cheltenham and the start of Grand National season. But it’s not just Sunday’s Naas location that’s different on this occasion.

Much of the fallout from a record-breaking Cheltenham festival continues to revolve around claims about a concentration of power among a tiny elite of owners and trainers within the National Hunt sphere and a consequent impact on competition.

The scale of that discontent can be gauged from some unfavourable comparisons with the flat game – traditionally viewed as the elitist playground of the super-rich – in terms of competition and strength of numbers.

Considering Aidan O’Brien unleashes his first runners of 2017 in the exotic splendour of Saturday’s $30 million Dubai World Cup card at Meydan, that’s quite a ‘volte-face:’ the times really are changing when the flat can be a more realistic option for the ‘small man’ than the supposedly more egalitarian jumps game.

Part of that is due to the flat’s greater international dimension which is advertised in Group One style on Saturday by a Dubai World Cup card headlined by the American superstar Arrogate. He appears in the $10 million feature at 4.45 on a programme which also has a significant Irish presence.

O’Brien carries the brunt of the Irish attack however with nine runners headed by Highland Reel and Seventh Heaven in the Sheema Classic.

The Breeders Cup hero Highland Reel was only fourth to Postponed in the race a year ago but is preferred by Ryan Moore which leaves Seamus Heffernan to team up with Seventh Heaven. The partnership landed last year’s Irish Oaks.

It could be significant though that St Nicholas Abbey was beaten in the Sheema Classic a year before he returned to win in 2013.

O’Brien runs both Lancaster Bomber (Moore) and Spirit Of Valor (Heffernan) in the UAE Derby while he has three in the nine furlong Dubai Turf headed by Deauville. Some bookmakers make Ireland’s champion odds-on to secure at least one winner on the Meydan card.

The Ballydoyle trainer has a handful of declarations for Naas which steps into the Day One breach with the Curragh’s €65 million facelift meaning a restricted season at HQ for the next two years.

“It’s been an interesting exercise in the two weeks since our last National Hunt meeting but we have everything in place and ground conditions are exceptionally good,” said the Naas manager Tom Ryan.

The going is still set to be testing however ahead of a programme which last year saw the subsequent classic winner Awtaad emerge from winning the Madrid Handicap.

Party Tiger is one of three rides for Paul Hanagan here while the former British champion jockey is on Spring Offensive  in the €100,000 Irish Lincolnshire.

Ireland’s champion Pat Smullen rides in all seven races and considering Harzand began his dual-Derby winning 2016 campaign off in March, another son of Sea The Stars, Toursoun, will probably attract plenty of attention in the concluding maiden.

One absent feature on Sunday will be the traditional post-race gallops by some of Aidan O’Brien’s top horses. Instead Naas is set to host the workouts on Monday.