Spotlight on Monalee as he takes next step over fences 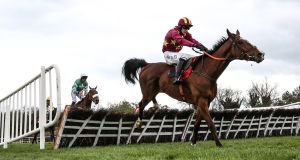 Monalee: will be the focus of attention in the Grade One Neville Hotel Novice Chase at Leopardstown. Photograph: James Crombie/Inpho

Only 76 horses have ever won the Cheltenham Gold Cup so the failure rate among those thousands labelled ‘potential Gold Cup horse’ over the years is astronomical. The odds are against Monalee ever joining the exclusive list. But that won’t stop expectation mounting further if he wins at Leopardstown on Friday.

Monalee has been filed in the ‘potential Gold Cup horse’ category for some time. It’s why he will be the principal focus of the Grade One Neville Hotel Novice Chase.

Such expectation certainly isn’t generated by Monalee’s trainer Henry De Bromhead. He cheerfully admits to rampant pre-race pessimism when it comes to all his horses. Not even a hugely successful Christmas week can interfere with De Bromhead’s instinct to downplay flippant labels.

It’s not as if Monalee is the property of a flamboyant owner such as Rich Ricci or Michael O’Leary either. And it’s not as if he boasts a particularly luminous CV. Monalee has won three of his eight racecourse starts and was beaten at Cheltenham last March.

But among experts who make their living from identifying young talent before it blooms, this strapping slab of young steeplechaser is widely speculated to be the real deal, a perfect example of the exciting commodity known as a ‘potential Gold Cup horse’.

In many ways it’s ridiculously presumptuous. Monalee has only had a single race over fences in his life. Logically it’s odds against him even making Cheltenham this March never mind in 2019 for the sport’s ultimate prize. But in a game built on illogical dreams it’s hard not to acknowledge the number of them swirling around this horse’s head.

It’s rooted in the widespread belief that Monalee’s high class hurdles form was just an appetiser for his real vocation over fences. And since he was only just touched off by Penhill in last season’s Albert Bartlett Hurdle at Cheltenham that could be quite a jump.

“He just got caught at Cheltenham but he’s always looked like a chaser. His hurdles form is rock solid so now he has to go and show what he did over hurdles and, hopefully, he’ll improve over fences as we all hope and think he will,” says De Bromhead.

It’s almost two years since Monalee first competed in public, winning a point to point at the Templenacarriga point to point in Co Cork. The legendary amateur rider Derek O’Connor was on board for trainer Thomas Fitzgerald. The following day De Bromhead and his wife Heather were checking out the youngster. And they had a client looking for a good young horse.

Barry Maloney is a venture capitalist with a track record of investing in fledgling tech companies such as Bebo. He is a former chief executive of the phone operator, Esat Digifone, and has had his wealth estimated at close on €100 million in some reports.

“Barry has been involved in various syndicates with me since I started. He was involved in a syndicate with a horse called Wild Spice who was third in a four year old bumper at Leopardstown all the way back in 1999,” De Bromhead recalls.

“He bought Heron Heights [four times winner over fences] a couple of years ago out of a point to point and we were looking for another horse for him.

“This horse was recommended to us after his point to point. Heather and I went to see him the day after and loved him. I think Barry heard it in our voices that we really wanted him,” he adds.

Friday’s race is technically termed the Fort Leney Chase, named after the 1968 Gold Cup hero. As a Grade One three mile test for novices it is designed to throw up future ‘Blue Riband’ candidates.

In its 14 -year history as a top-flight event it has been won by some top horses including in 2016 by Our Duke. Like others such as Last Instalment (2011) and Don Poli (2014) he had barely passed the post before speculation turned to the future and whether he could indeed by a Gold Cup horse.

Yet no winner of this Christmas highlight has gone on to ultimate glory. It’s a fact that illustrates the scale of the task Monalee has ahead of him. But if he wins in style on Friday it still won’t stop a lot of people continuing to believe that he could yet go on to achieve the ultimate dream.