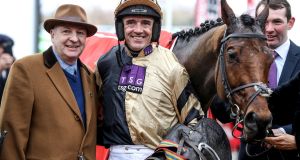 Eight-times Grade One winner Nichols Canyon — the only horse to beat the mighty Faugheen — suffered a fatal injury when falling at the fifth flight in the Squared Financial Christmas Hurdle at Leopardstown.

Willie Mullins’ charge parted company from Paul Townend at the obstacle in front of the stands on the first circuit and was quickly attended to, but was unable to be saved.

The seven-year-old, who carried the colours of Andrea and Graham Wylie, lifted the Stayers’ Hurdle at the Cheltenham Festival in March for what proved to be his final success at the top level.

But arguably his greatest triumph was when lowering the colours of his stablemate Faugheen in the 2015 Morgiana Hurdle at Punchestown.

Officials at Leopardstown said Nichols Canyon had suffered a fractured humerus just above the elbow.

Paying tribute, regular rider Ruby Walsh told At The Races: “It’s terrible. He had some wonderful days in Cheltenham, great days here, Fairyhouse, Punchestown - he was a wonderful little horse, a real character.

“He tried his best every day and it’s desperately sad for the yard and the Wylies.

“He was a hardy little horse and he was brave, he took the odd chance, but don’t most of us.”