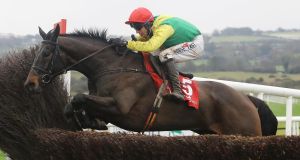 Sizing John will bid to complete a memorable year by claiming the €150,000 Christmas Chase at Leopardstown. Photograph: Lorraine O’Sullivan/Inpho

Those who appreciate watching a champion at the peak of their powers could be in for a treat at Leopardstown on Thursday when Ireland’s ‘Horse of the Year’ Sizing John tries to complete a perfect 2017.

The €150,000 Christmas Chase is being widely billed in terms of Sizing John versus Yorkhill but it’s hardly a straightforward comparison.

For all the raw ability he has shown, and the potential that clearly lurks within him, Yorkhill still represents something of a project. He is a fascinating assortment of quirks which make him perhaps the sport’s greatest enigma. But he is far from the finished article.

In contrast, Sizing John is the real deal. Freed from the chore of chasing Douvan around over two miles he has blossomed into the sport’s supreme staying chaser during 2017.

Since winning the Kinloch Brae at Thurles last January he hasn’t looked back. An unprecedented Gold Cup ‘Triple Crown’ last Spring included the ultimate ‘Blue Riband’ at Cheltenham and his return to action in the Durkan earlier this month was enough to promote him to a career high rating of 170.

Even with a perfect five for five record already in 2017, Sizing John’s trainer Jessica Harrington believes the giant seven year old may be continuing to get even better.

So, in terms of watching a superb steeplechaser do what he does best, the prospect of Sizing John at Leopardstown is about as good as it gets.

This will no solo lap of honour however. Yorkhill’s presence alone ensures that. This is a talent so major that he was able to throw away the guts of 50 lengths at Fairyhouse last Easter by persistently jumping to his left yet still came within a whisker of landing a Grade One.

It was a performance that sums up much of Yorkhill’s career, tantalising with what he might be able to do if only he could add reliability and calm to his make-up. But this is a scenario with little room for ‘if onlys’.

If he settles, and if he thrives for a first step up to the three miles that his pedigree suggests he should relish, and if his jumping improves for going left-handed, and if he doesn’t cock his jaw, then Yorkhill could finally prove himself to be the real deal too. It could happen, but there are a lot of ifs.

There are no ifs and buts about Gigginstown’s determination to try and make it four-in-a-row in the race still widely referred to as ‘the Lexus’.

Michael O’Leary throws five darts at it, including last year’s winner Outlander, and a dozen runners overall is a notably strong field numerically considering the presence of Sizing John in particular.

Djakadam takes another shot at the champion while JP McManus is triple-handed, including with Minella Rocco who travels from Britain.

But it’s hard to look at this race in any other context than Sizing John’s status as champion. Only Best Mate (2003) and Bobs Worth (2013) have won it as reigning Gold Cup holders. Joining an elite group on the back of a perfect six out of six campaign would be a perfect seal on 2017 for Sizing John.

Apple’s Jade tries three miles for the first time in the Squared Financial Christmas Hurdle and once again it’s hard to see opposition even of the quality of Nichols Canyon and Jezki being able to successfully concede her a 7lbs sex allowance.

There was certainly no evidence of her weakening at the end of the Hatton’s Grace last month and if Apple’s Jade is as impressive again the Gigginstown team could face renewed calls to tackle the Stayers at Cheltenham in March rather than defend her OLBG crown.

Willie Mullins runs four in the Pertemps Qualifier and the lightly-weighted four year old Didero Vallis could be the solution. He ran a good second to Midnight Stroll at Fairyhouse earlier this month and this stamina test looks like it could suit.

Mullins has the newcomer Francin in the opening maiden hurdle although Flawless Escape looks to set a decent standard. A bumper winner on testing ground, Gordon Elliott’s runner didn’t do much wrong on his last appearance at Punchestown.

The Mullins-Elliott rivalry also looks set to extend to the Beginners Chase and even though Bacardys has proven top-flight winning form, and a run over fences already, Sutton Place should be tough to beat.