Apple’s Jade finds more to pip Supasundae, as Nichols Canyon has to be put down 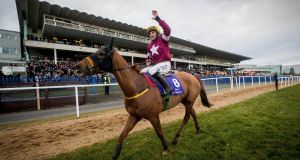 The winner, ridden by Sean Flanagan and trained by Noel Meade, powered to victory on the run-in to back up his other Grade One success in the Ryanair Gold Cup Novice Chase at Fairyhouse in April.

Gigginstown were also responsible for the fifth and sixth, in Alpha Des Obeaux and Valseur Lido.

Flanagan said: “He’s been a very good horse to me in general and did everything perfectly today, I’m delighted.

“I thought halfway down the back I was too far back and was flat out and couldn’t be much closer. There was no hiding place and it was a true-run race.

“To be fair when I got a bit of room he came alive. He’s got loads of speed. He’s a very good horse.”

He added: “I wouldn’t be worried about the (Cheltenham) Gold Cup distance as he settled well there and he has won at the track before.”

Paddy Power slashed Road To Respect to 8-1 from 20-1 for the Gold Cup, with King George winner Might Bite the 4-1 favourite from 11-2 and Sizing John out to 8-1 from 4-1. Meade said: “Everything went according to plan. The hood obviously worked well. Sean rode him the other day and he said maybe a hood might help him to settle early on. He settled great and he gave him a most beautiful ride. He’s a Gold Cup contender now, so he’ll go for the Gold Cup. Whether he runs in between or not, I don’t know.”

But the Grade One race was marred by the fall of Stayers’ Hurdle hero Nichols Canyon, who came down at the fifth flight in front of the stands and was attended to as the obstacle was omitted on the final circuit. He sadly had to be put down.

The two principals cut out the running between them over the three miles and it looked for a long way as though Supasundae would come out on top, until Apple’s Jade (4-6 favourite) — who was trying the trip for the first time — pulled out more on the long run to the line.

Davy Russell, who was replacing the injured Jack Kennedy, got extra out of the Gordon Elliott-trained mare to snatch the verdict by half a length for owners Gigginstown House Stud. Bapaume was third.

Russell said: “She’s something else. I’ve only ridden her at home and it’s a pleasure to ride her, even at home. Lisa O’Neill does all the work on her, but really Jack (Kennedy) is the man that has probably made her and unfortunately he got a couple of horrid falls during the week.

“All credit has to go to Jack, Lisa and the team at home, really. I knew when I got stuck into her she’d find loads — Supasundae ran well in Fairyhouse and I knew he’d stay, but to be fair, Apple’s Jade is all heart.

“It’s amazing what a good filly can do.”

Leeds go back to the summit after impressive win over Stoke 19:32
Holder shines with the ball as West Indies take control against England 19:23
Club rugby to start back from September 12th on regional basis 18:32
Katie Taylor out to banish all doubts in rematch with Delfine Persoon 17:56
Trick or treat: Ireland set for Halloween showdown with France in Paris 17:29
Here is your handy guide to sport on television this week