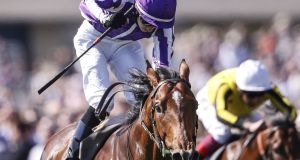 Epsom Derby history beckons for Aidan O’Brien on Saturday with Saxon Warrior an odds-on favourite to give the Irishman a seventh success in racing’s ‘Blue Riband.’

That will equal the all-time record currently shared by a trio of legendary names spanning three centuries of racing history.

O’Brien could trump them all in terms of speed should he win on Saturday having secured the first of his Investec Derby triumphs with Galileo just 17 years ago in 2001.

He was followed a year later by High Chaparral and subsequently by the hat-trick of Camelot (2012,) Ruler Of The World (2013) and Australia in 2014 while Wings Of Eagles earned a place on racing’s most prized roll-of-honour with a shock 40-1 success last year.

That equalled the legendary Vincent O’Brien’s Derby haul of six Derby victories and his successor at the world-famous Ballydole stables is again set to tackle Epsom in strength on Saturday.

Saxon Warrior tops O’Brien’s list of seven entries left in the race after Monday’s forfeit stage. That comprises half the possible contenders remaining in the Derby although Rostropovich is likely to wait instead for the Prix Du Jockey Club at Chantilly on Sunday.

Dermot Weld’s Derrinstown Trial winner Hazapour is on course to try to emulate his “uncle” Harzand, the 2016 Derby hero, while the Dante winner Roaring Lion is set to lead the home defence for John Gosden.

Victory for any of the Irish hopes will be a 21st Derby success for a horse trained in this country.

It is Saxon Warrior who looks to dominate the Derby picture though, and has already been backed down to 4-6 to maintain his unbeaten record in the race that matters most.

The 2,000 Guineas winner is also just 11-4 to ultimately become the first since Nijinsky in 1970 to complete the Triple Crown in September’s St Leger.

James Doyle will maintain his partnership with the Chester Vase winner Young Rascal after being released from his commitments to Godolphin and one of their Derby hopes Dee Ex Bee. The latter will be ridden by Silvestre De Sousa.

Young Rascal beat Dee Ex Bee at Chester and is a general 10-1 third favourite for Saturday while Dee Ex Bee is 25-1.

“I think it suits everyone involved. Obviously James has ridden Dee Ex Bee but I’m quite sure he was keen to ride William Haggas’s horse, having been to ride him at ‘Breakfast with the Stars,” said Charlie Johnson, assistant to his father, Mark, who trains Dee Ex Bee. “Silvestre won on Dee Ex Bee first time out and he has a great record at Epsom. I think all parties are happy with how it’s turned out and we’re all set for Saturday,” he added.

Twenty four hours before the Derby O’Brien will try to claim a seventh Oaks success and has eight of the 13 entries left in the fillies classic on Friday. They include Magical, Magic Wand and Forever Together although it is Godolphin’s Wild Illusion that tops the ante-post betting.

O’Brien holds a record eight victories in Friday’s other Group One at Epsom, the Coronation Cup, although his intended runner, Idaho, faces a formidable task against Europe’s top-rated runner, Cracksman.

The going at Epsom is currently described as being on the slow side of good with some showers forecast over the coming days.

The weekend classic action will finish with Sunday’s French Derby for which 30 horses in all currently remain in contention.

They include eight Irish trained colts with Dermot Weld leaving in Bandua and Joseph O’Brien keeping Escamillo and Latrobe in the mix. As well as Rostropovich Aidan O’Brien has also left in Kenya, Hunting Horn, Flag Of Honour and Seahenge.

The Prix Du Jockey Club and the Prix Diane (French Oaks) remain the only major European classics O’Brien has yet to win.

Dermot Weld will hope for a Derby countdown boost to Hazapour’s Epsom chance when he sends half a dozen runners to Gowran on Tuesday evening.

They include Bella Estrella who won her two career starts to date within a week last August. She steps up into Listed class for the Victor McCalmont Stakes which was moved from a cancelled meeting here at the start of the month.

Damselfly is the sole three year old among the seven runners and on quick ground conditions they could all face a tough task against the former May Hill winner Turret Rocks.

Bolger introduces the beautifully bred Park Bloom - a full sister to the Oaks winner Was – in a maiden but Bit Of Banter can relish the step up in trip after a reasonable Navan run behind Broad Street.

Tuesday’s other fixture is at Ballinrobe where the €40,000 McHale Mayo National takes centre-stage. Net d’Ecosse looked a different proposition when winning at Kilbeggan last time and could maintain Michael O’Leary’s ‘National’ run.