Elarqam to live up to classic pedigree in Irish 2,000 Guineas 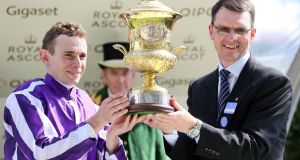 Jockey Ryan Moore will be on board favourite Happily for trainer Aiden O’Brien in the 1,000 Guineas on Sunday. Photograph: Brian Lawless/PA

im Crowley can’t ride Europe’s fastest horse on Saturday although a first classic success will make it a small price to pay for the rider should Elarqam land the Tattersalls Irish 2,000 Guineas at the Curragh.

Britain’s 2016 champion jockey will have to watch on screen when top sprinter Battaash returns to action in Haydock’s Temple Stakes only ten minutes before Ireland’s 2018 classic campaign gets under way.

Like Battaash, Elarqam is owned by Crowley’s boss, Sheikh Hamdan, and is a prime fancy to live up to his blue-blooded pedigree in the first colts classic of the Irish season.

The Mark Johnston-trained star lost his unbeaten record when fourth to Saxon Warrior in the Newmarket 2,000 Guineas three weeks ago. Significant improvement is anticipated for that experience and no one can argue Elarqam isn’t bred for the job.

It is the sort of pedigree classic races both define and are defined by, similar to the favourite for Sunday’s 1,000 Guineas, Happily, a full sister to both the 1,000 Guineas winner of 2014, Marvellous, and Gleneagles who secured 2,000 glory the following year.

Crowley’s own route to potential classic glory has been more circuitous. It’s a dozen years since the former journeyman jump jockey switched to the flat. It has proved an inspired decision with multiple Group One successes and a British championship just two years ago.

That propelled the Englishman with the Irish name into the prestigious Sheikh Hamdan job, a position defined by classic victories. The Irish 2,000 has proved elusive for the owner though so Elarqam could prove a gift for more than just Crowley on Saturday.

With the potentially outstanding Saxon Warrior waiting for next week’s Derby, circumstances look to have conspired in Elarqam’s favour too.

Despite finishing only fourth to Saxon Warrior his Newmarket effort still looks the single best piece of form in the field from this season. With such a run under his belt Elarqam should be sharper for both the outing and the experience.

To live up to his parentage the English raider will have to get the better of a home team lead by Aidan O’Brien’s four runners. Unlike Crowley, the Ballydoyle trainer is looking for a 40th Irish classic, a 76th overall, and a 12th in the Irish 2,000 Guineas alone.

If they’re intimidating figures the suspicion remains that O’Brien has come into this race more powerfully armed in the past.

Ryan Moore has opted for the champion juvenile US Navy Flag over Newmarket sixth, Gustav Klimt. Fast ground will be ideal for the Ballydoyle No. 1 but his stamina isn’t assured on the stiff Curragh mile and he did fail to make the frame in the French Guineas.

Al Shaqab Racing’s purchase of the unbeaten Zihba, as well as Godolphin shooting high with the handicap winner Symbolization, suggests a rare classic opportunity could exist.

No one will be more keen to snap it up than Crowley who will be bolstered by the unambiguous statement earlier this week of his predecessor, Richard Hills, now one of Sheikh Hamdan’s managers, who said Elarqam “should win”.

Pre-race confidence has a nasty habit of coming back to bite but it appears only a statement of fact that Happily’s credentials look the most impressive of all this weekend.

As a proven dual-Group One winner she has already lived up to an illustrious bloodline. Her CV even boasts a defeat of colts as a juvenile, beating no less than Olmedo and Masar in the Prix Jean Luc Lagadere in October.

Factor in too a fine run when third in the English 1,000, as well as anticipated improvement from that, and it’s no surprise Moore is in on board her rather than any of Happily’s three stable-mates.

O’Brien has already stated he will be thrilled if Clemmie makes the first five on her first start of the season. Home contenders such as Who’s Steph and Lightening Quick have improvement to find on figures although Chiara Luna is one that could step up significantly for this fast going.

It wouldn’t be a surprise though to see a Coolmore-Godolphin finish though as Soliloquy hasn’t much to find with Happily on Newmarket form and is likely to be ridden more aggressively this time. Happily can still emerge best though and give O’Brien a record eighth win in the fillies classic.

If Happily can boast star quality then perhaps the most important runner of the weekend could yet turn out to be Defoe.

His trainer Roger Varian plans to walk the track on Sunday ahead of the weekend’s third Group One, the Tattersalls Gold Cup, to see if there’s enough ease in the ground to allow the horse run.

Plenty of fingers will be crossed he does or a contest that already looks less than vintage by top-flight standards will be reduced even further.

Varian’s dilemma between ground and opportunity is unenviable although either way it will be fascinating to see the tactics employed by Ballydoyle for their pair, Cliffs Of Moher and Lancaster Bomber.

Last year’s Derby runner-up is the stable No.1 but has often been less than convincing since Epsom a year ago.

Lancaster Bomber for his part tackles ten furlongs for the first time. He’s been placed in five Group Ones to date but looks straightforward. In a tactical affair, and at the likely odds, he appeals more than his stable companion.