Roses aiming to Thunder home at Aintree for Sandra Hughes

Velvet Maker to prevail in Grade 3 tussle at Navan 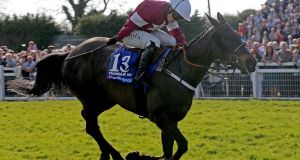 Black Apalachi subsequently chased home Don’t Push It in the 2010 National, and Thunder And Roses’s trainer is following a tried-and-trusted route, along with four other Irish hopefuls, on Saturday.

“I think if he puts in a clear round, he’s got to be there or thereabouts. This is a trial with April in mind. If all goes well, we’ll then be planning everything around that. He’s rated high enough to get in, so we’ll have to mind him,” Hughes said.

“He’s schooled over National fences at home and there’s no reason he shouldn’t take to them.”

Bryan Cooper will ride Thunder And Roses over the big fences – and also Art Of Logistics in the Sefton – but the jockey’s principal focus will be Don Poli’s reappearance in a four-runner Listed Chase.

With Cooper on duty in Liverpool, Davy Russell comes in for some prime Gigginstown rides at Navan, including the triple-chase winner Lord Scoundrel in the Grade 3 feature.

This could turn out to be a duel between the less exposed pair of Ttebbob and Velvet Maker, both of which were impressive on their debuts over fences. Slight preference is for Velvet Maker who should step up further for his Naas experience.

Gordon Elliott runs eight in the opening maiden hurdle – although Willie Mullins’s own Gigginstown hope, Bello Conti, looks an interesting recruit based on a good run in France last February.