Shuttered shops existed to sell stuff for a rushed, commuting office life that millions of people may never lead again 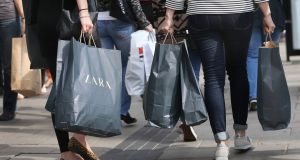 After Covid-19 lockdown will people return to the conspicuous consumption of the past? Photograph: Philip Toscano/PA

Last weekend I was lolling on the sofa reading the papers in the afternoon sun when I was struck by an awful thought.

I realised I am so dull that, even though I have spent more than a month in Covid captivity, I miss remarkably little of the life I led before.

It turns out I can live easily without Friday nights in a restaurant or Saturdays in a bar. I always thought I loved going out to the cinema but apparently I am just as happy at home with Netflix. The hundreds of pounds I spend each year on the gym also look increasingly pointless. I can get by with a bike ride involving hills and the odd lope around the block.

It was while I was on one of those lopes, down the local high street, that a more profound realisation dawned. Shop after shuttered shop existed to sell stuff for a rushed, commuting office life that I – and millions like me – may never lead again.

Assuming I manage to keep my job, there seems a high chance I will be asked to spend more time slobbing about at home

Assuming I manage to keep my job, there seems a high chance I will be asked to spend more time slobbing about at home. So I won’t need so many visits to my favourite dry-cleaner to freshen a batch of blouses, or the nice shoe repair man to fix a rickety heel. I doubt I will spend as much on hair and general upkeep either, or the all too occasional frock.

I probably won’t be alone. The mass coronavirus experiment in home working is already prompting the bosses of big employers such as Barclays bank and the Mondelez food group to wonder aloud if their reams of big city offices might be a thing of the past.

The question is, now that people like me have had a taste of frugality, how long will it last once a semblance of normality returns? Will there be a pent-up splurge of excess? Or will we look back and wonder what made so many of us spend what the British ecological economist, Professor Tim Jackson, has called money we don’t have, on things we don’t need, to create impressions that won’t last, on people we don’t care about?

There is no real way of knowing, even if the answer is vital to businesses worldwide.

But it is possible to talk to Michael Landy, a London artist who catalogued everything he owned and took it to a disused department store in the shopping mecca of Oxford Street in early 2001, where he systematically destroyed the lot in an arresting piece of performance art called Break Down.

Passport. Love letters. Birth certificate. Paintings from famous artist friends. A Saab car. All of it went, leaving him with a pair of boots and the boiler suit he was standing in at the time. I still remember watching a BBC documentary about it, mouth agape, just after I moved to London a year later.

Considering how Covid-19 has unexpectedly revealed my own capacity for cutbacks, I called Mr Landy last week to find out if his extreme act of deprivation had had any lasting effects.

“It changed me as a consumer, most definitely,” he said. “I have a lot less things than I had before.” He also became much more aware of what he was buying, he said, and prone to periodic clear-outs.

On the other hand, he did get another car and has a “normal” home in east London, as well as a studio. When the UK lockdown stopped him going to the gym recently, he bought a punch bag, which is in the studio next to a cross-trainer exercise machine.

So he is not a total loss to the consumerist cause. But when he thinks back to his public bout of destruction in 2001, he mentions two things that seem relevant to today’s unsettling times.

First, a lot of the thousands of people who came to gawk at him began to talk unprompted about their own possessions, and how they really only cared about photos, gifts or things they had made themselves. I suspect a lot of us have thought about what really matters lately.

Second, he says people were unexpectedly kind to him. Strangers bought him clothes. Friends gave him necessities. Ultimately, he was left with a sense that feels familiar in today’s strained times, with their unusual public displays of gratitude to the workers we rely on.

“I came away thinking,” he said, “that on the whole, the British public are alright.”