HRI chief says Cheltenham ‘should probably not have taken place’

Brian Kavanagh has ‘some sympathy for the Cheltenham authorities’ 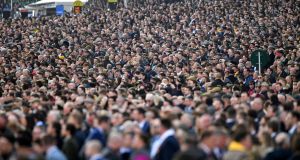 The chief executive of Horse Racing Ireland has stepped into the debate over the staging of last month’s Cheltenham Festival by suggesting that the event should “probably” not have taken place because of growing concerns about spread of coronavirus.

In the course of a 30-minute interview with the website Sport For Business, which also focused on Irish racing’s response to the crisis, Brian Kavanagh was asked whether he thought that Cheltenham should have “pulled the shutters down” in the middle of its four-day Festival meeting, which ran from March 10th to 13th.

“It’s very interesting, that was the very week where the whole thing ramped up with coronavirus,” Kavanagh said. “I went there for the first two days and it was remarkable that I came back to a different country on Wednesday night to the one I left on Monday.

“I think on Tuesday, the images from Italy started to come through in great detail and by the end of that week, we were racing behind closed doors in Ireland. I think with hindsight, people would recognise that Cheltenham would have been much better if it went behind closed doors, not a decision that we have any control over, it’s entirely a matter for the British authorities and the British government.

“The irony is that while Cheltenham was going ahead and people were at the races, the pubs back in Ireland were packed with people watching Cheltenham, but it certainly couldn’t have come at a worse week, it was unfortunate because it was the last major sporting event to take place. Should it have taken place? With hindsight, probably no but everyone’s wise after the event.”

Kavanagh adds that he has “some sympathy for the Cheltenham authorities” as “the idea of saying in the middle of their Festival, we’re aborting after two days or we’re going behind closed doors when your government is telling you not to, the government is saying that we’re happy for you not to and when you’ve got so many people in situ, it’s not easy.”

In recent days, figures showing that Gloucestershire hospitals NHS trust, which covers Cheltenham, has recorded more deaths from coronavirus than a number of neighbouring trusts led to calls for an inquiry into whether allowing the Festival to go ahead was to blame. However, the raw data did not account for the relative sizes of the trusts, the social or age profiles of their catchment areas or their population densities.

Figures published this week by Edge Health, a private firm which supplies data analysis for healthcare providers, also claimed to show that the Cheltenham Festival, the Champions League match between Liverpool and Atletico Madrid on March 11th and the Manchester derby on March 8th had all resulted in an increase of between 2.5 and 3.5 daily deaths in local hospitals “20 to 35 days later”.

Between 60,000 and 68,000 spectators attended each day of the Festival seven weeks ago, including an estimated 10,000 who travelled from Ireland for one or more days of the meeting. By April 2nd, three weeks after the final day, only one spectator from Ireland was known to have tested positive for Covid-19, and it was unknown when or where he had been infected.

“A lot of the people who were at Cheltenham, they came back, they did the responsible thing, they self-isolated,” Kavanagh said, “and we moved immediately behind closed doors after the Taoiseach made his speech on March 12th so by Friday 13th [the day of the Cheltenham Gold Cup] we were behind closed doors for 10 days until the general lockdown. Cheltenham, it was the very week when the thing ramped up.” – Guardian

5 Gianluigi Buffon at 43: why messing up is key and what makes him happy