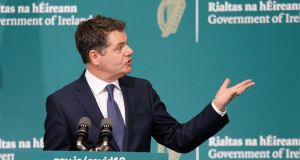 The State will be able to support businesses and people facing financial difficulty for “a period of time” but cannot make “massive” financial commitments indefinitely, the Minister for Finance has said.

Paschal Donohoe said on Sunday that the Government must strike a balance between affordability and support packages in order to avoid three separate welfare groups emerging from the Covid-19 crisis.

“We need to make sure we don’t end up with one group of people who are receiving a set of payments they got before the disease hit us; another group of people who were receiving the pandemic unemployment payment and then a third group who might become unemployed at some point in the future,” Mr Donohoe said on RTÉ’s This Week programme.

He said that over time the Government would need to “balance our books again” but because of the financial stability prior to the pandemic the State could maintain support schemes for a period of time. However, he acknowledged that it would become difficult to continue these supports if the economy did not start to grow again in the future.

At the start of the crisis, the Government introduced a wage subsidy scheme that that supported companies to keep people in jobs and a pandemic welfare payment of €350 per week for those who lost their jobs. However, in recent weeks, Mr Donohoe has indicated that the Government would consider “tapering and changing” the special €350 pandemic payment when the initial 12-week period runs out in mid-June.

Mr Donohoe unveiled on Saturday a series of measures worth up to €6.5 billion to help businesses impacted by Covid-19 including a commercial rates holiday. Up to €2 billion in State-backed loans is also to be made available for small and medium-sized enterprises (SMEs). The loans will range from €10,000 to €1 million and will be 80 per cent guaranteed by the State and offered at below market rates.

“The schemes that we are discussing here are costing many hundreds of millions of euros per week and this is a balance and a decision that we are going to try and get right and I believe we will get it right across the coming weeks,” said the minister on Sunday.

The Government is aiming to “synchronize” the re-opening of the Irish economy with “a growing confidence regarding where we are with the disease,” said Mr Donohoe.

He added that he was “reasonably certain” legislation on the management of tax liabilities and the installation of a credit guarantee scheme for new lending would be passed in June or July.

On the high cost of rents for businesses, the minister said he had called on commercial landlords to remain cognizant of how different the Irish economy will be as the State emerges from the pandemic.

Asked to comment on the legitimacy of the current Government given the results of the February election, Mr Donohoe underlined that without the cabinet decision made in recent weeks, more than one million people would be on the live register while business difficulties would be “far, far worse”.