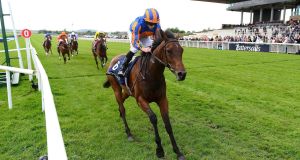 The first classics of 2020 in Ireland, the Tattersalls 2,000 and 1,000 Guineas, are still scheduled for the Curragh over the weekend of May 23d-24th. Photograph: Inpho

There was uncertainty in Irish racing circles on Friday night about when the sport might be able to resume under government plans to ease restrictions due to the Covid-19 pandemic on a phased basis.

Initial speculation about a quick return to action arose when An Taoiseach Leo Varadkar said some outdoor sporting activities would be allowed resume under phase one of the plan which is set to take place on May 18th.

Later details of the five-phase system revealed though that “behind closed doors sporting activities where arrangements are in place to enable participants to maintain social distancing’ are in phase three. That is due to not take place until June 29th.

However the picture is confused by how racing comes under the government umbrella of the Department of Agriculture, Food & Marine rather than sport.

French racing is still set to begin behind closed doors on Monday week despite all other sport being cancelled there until September. That’s because it falls under the agriculture sector in France too.

“All this needs to be clarified. It won’t be known, I suspect, until tomorrow when we will try and get more clarity on the situation,” said Horse Racing Ireland’s chief executive, Brian Kavanagh.

There had been earlier reports that horse racing’s case for a quick resumption had received a favourable response at Friday’s two and a half hour cabinet meeting.

Should racing get a green light on May 18th it would be the first major sport in Ireland to restart in some form since the government cancelled all sporting action on March 24th due to Coronavirus.

Racing behind closed doors has continued in a number of locations around the world including Hong Kong and Australia.

Plans for the sport to resume without spectators in France on Monday week are in place while racing could resume in Germany before that.

On Friday Britain’s racing authorities released provisional plans for a resumption there later this month if permitted to do so by the British government.

Ten fixtures took place in Ireland behind closed doors prior to lockdown and Horse Racing Ireland has said that is evidence of how the sport can take place safely in such restricted circumstances.

With almost two months of action already lost, including a premature end to the National Hunt season, HRI plans to start a revamped fixture list with a month of flat racing.