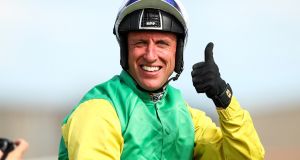 One of the most popular racehorses in the country, Apple’s Jade, returns to action at Navan on Sunday where she will be ridden for the first time by Robbie Power.

Jack Kennedy is the 10-time Grade One winner’s regular jockey. But, since he’s still sidelined by injury, Michael O’Leary’s Gigginstown Stud team has opted to go with Power for their star mare as she pursues a hat-trick of wins in the Lismullen Hurdle.

It underlines once again the apparent slide down the Gigginstown pecking order of Davy Russell, the last person to ride Apple’s Jade when Kennedy was unavailable.

That was in the Christmas of 2017 when the former Gigginstown No.1 won on her in a memorable finish at Leopardstown, ironically at the expense of Power on Supasundae.

Power also teams up with the Ryanair boss for Abacadabras in an earlier Grade Three at Navan while Keith Donoghue rides Hardline – a regular mount for Russell last season – in the featured €45,000 Tote Fortria Chase.

Russell instead is on board Hardline’s stable companion Doctor Phoenix although the five-runner heat could wind up a match between two of last season’s star novices. Duc Des Genievres won the Arkle at Cheltenham while A Plus Tard won a festival handicap by 16 lengths.

Henry De Bromhead’s runner beat his rival in a Beginners Chase last year but is brought back to two miles for the first time and that could see a form reverse.

With testing ground assured the champion trainer is cranking his huge team into top gear including Tiger Tap Tap who goes in a Grade Three won last year by the subsequent Champion Hurdle hero Espoir D’allen.