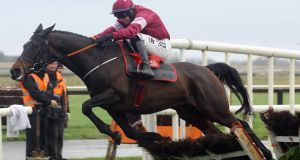 Run a poll as to which horse is Ireland’s most popular racehorse right now and the odds are Apple’s Jade tops it.

She isn’t the best. The mighty Faugheen is officially rated a stone better over hurdles. Douvan has an even higher mark than that over fences. But it appears to be their former stable companion that the Irish racing public has taken to their hearts.

Injudicious as it may be a to say so, a lot of that probably comes down to gender discrimination. At least it’s of the positive kind.

Maybe it has something to do with mares being the basis of many family bloodstock operations. Or maybe it’s a protective instinct. But there’s no doubt even the most bleary-eyed of fans can find themselves getting romantic about a top mare.

Dawn Run was no Arkle in terms of ability; but if Arkle conjured awe, Dawn Run generated affection like few others.

And Apple’s Jade seems to have inherited the mantle. When she lines up in Thursday’s Squared Financial Christmas Hurdle, a surge of sentiment will urge on the big bay as she tries to push her stamina to three miles for the first time. And it won’t be totally dictated by the money riding on her.

There’s something of an irony then that she’s owned by Michael O’Leary. O’Leary and sentiment in the same sentence can look as unlikely as O’Leary and union.

But the Ryanair boss relishes a good horse and his Gigginstown Stud team know better than most how rare a jewel they have in Apple’s Jade.

“Her enthusiasm is fantastic and that’s unusual for a jumping mare,” says O’Leary’s brother, Eddie, who oversees Gigginstown’s operation. He is a leading consignor of flat horses too and believes the popularity of good jumping mares is to do with their comparative scarcity.

“On the flat fillies can work away at two and three but at four and above their ovaries are waking up and they want to do other things in life. That’s why really good jumping mares are few and far between.

“It’s got nothing to do with being physically weaker. They’re just being mares, and with most of them, biologically, their minds switch to other things as they get older. But a good one is worth ten fellas,” he insists.

Michael O’Leary’s interests are in racing not breeding. But the introduction of an improved programme for fillies and mares in recent years has seen Gigginstown invest in some. At the end of their racing careers they are sold for someone else to breed from.

Apple’s Jade was sourced in France by agent Pierre Boulard for Willie Mullins in 2015. She was bought by O’Leary after winning a race in Vichy and won at Leopardstown’s Christmas meeting two years ago.

It was for Mullins that she put up her most spectacular performance later that season, winning a Grade One at Aintree by an astounding 41 lengths. Five months later she was the leading light among 60 horses removed from the champion trainer by O’Leary in a dispute over training fees.

Her new trainer Gordon Elliott must have felt pressure when she was beaten in her first two starts for him. But it was third time lucky when she won last year’s Hatton’s Grace and she subsequently bounded up the hill to win at Cheltenham.

This year she has looked better than ever and in repeating her Hatton’s Grace victory earlier this month officially put in her highest rated ever performance.

That she has won half a dozen times at the top level is always going to help a horse’s popularity. But it doesn’t explain why Apple’s Jade has been adopted so enthusiastically by so many. Her rival Nichols Canyon has won eight Grade Ones and operates in comparative anonymity.

Unlike Dawn Run, who could be famously difficult to handle, O’Leary says Apple’s Jade is easy to deal with. She is also good enough, he feels, to make redundant the 7lb sex allowance she receives from males.

The allowance is a factor though in O’Leary’s prediction that there will be greater numbers of jumping mares in future.

“There is a programme for them now and the 7lbs is unbelievable. They’re worth 7lbs any day of the week. But I do feel when it comes to Grade Ones there shouldn’t be a sex allowance,” he says.

For most punters and fans though a debate about allowances for gender is one for another day when their pride and joy won’t be lining up. The good news for them is that Gigginstown have no plans to pull the plug on her racing career any time soon.

“As long as she’s enjoying it she’ll go on until her teeth fall out!” laughs O’Leary. Who said romance is dead.