Keogh expected to take over the reins at the Curragh 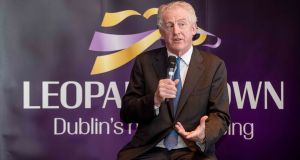 Leopardstown’s chief executive, Pat Keogh, is on the verge of taking over as head of racing operations at the Curragh.

The Irish Times understands the appointment is likely to be confirmed early this week with Keogh initially likely to juggle roles at Ireland’s two premier flat racecourses.

The move comes on the back of a turbulent period at the new €81 million Curragh facility which opened just two months ago but has been beset by problems and controversy since then.

They came to a head at last month’s Derby Festival where disappointing attendance figures didn’t prevent widespread criticism over the race-day experience for many fans with long queues for toilets and drinks.

Last week the Curragh’s chief executive Derek McGrath announced his intention to step down at the end of the season.

Sources indicate his departure may come sooner than that as the Curragh board reacts to McGrath’s suggestion of a failure to “integrate behind a shared vision for what we want the Curragh to be”.

It’s understood those comment wasn’t well received by sections of the board which includes representatives from private investors, such as Coolmore Stud, Sheikh Mohammed’s Godolphin team and the Aga Khan, who’ve put up to €5 million each into Irish racing’s biggest ever capital development project.

The board also includes members from the Irish Horseracing Regulatory Board and Horse Racing Ireland representing the State which put €36 million of public money into the revamped Curragh.

Victory for Frankie Dettori on Star Catcher in Saturday’s Kerrygold Irish Oaks was a welcome positive outcome for the track which has eight more fixtures this year.

The most important of those will be its leg of ‘Champions Weekend’ on September 15th , the day after Leopardstown hosts the opening day of Irish racing’s international flat racing showpiece event.

Keogh was appointed chief executive of the HRI-owned Leopardstown in 2011 and has been a key figure in the development of ‘Irish Champions Weekend’ which started in 2014.

His involvement in that is believed to be an advantage in preparing for this year’s renewal of a two day event worth over €4.6 million in prizemoney.

The Dubliner previously worked for Coolmore as finance director and has also been employed by Allied Irish Bank in the past.

Under Keogh’s management, the Dublin Racing Festival was introduced last year with jump racing’s top races concentrated into a single weekend in February.

That initiative has been praised for putting a priority on public engagement, something which is likely to be a priority for what has become a beleaguered Curragh project.

On Sunday various industry officials weren’t prepared to give official confirmation of Keogh’s appointment as something of a ‘caretaker manager’ although it is expected shortly.

The issue of attendances at the Curragh during the Derby Festival sparked debate when HRI’s chief executive Brian Kavanagh described an official 3,661 crowd reported for the Pretty Polly Stakes card as disappointing.

Saturday’s Oaks programme saw an official 4,297 attendance although Kavanagh said that has to be put into the context of other weekend sporting attractions.

“There’s been so much choice, particularly with an Irishman leading the British Open, the racing on TV and a couple of high-profile GAA matches. It’s a sign of the competition,” he said on Sunday.

“I said what I said about the Pretty Polly and there is a job of work to be done to build attendances everywhere. But don’t forget the half-year attendances are up eight or nine per cent which is encouraging,” Kavanagh added.

That half-yearly figure was backed up with an 11.5 per cent rise in on-course bookmaker turnover and a 5.4 per cent increase in Tote betting. Both represent a significant reversal on trends in recent years.

On Saturday Dettori treated fans to one of his trademark ‘flying dismounts’ after Star Catcher gave him a fifth Irish Oaks success.

It was an eighth Group One victory in just 50 days for the 48-year -d superstar rider who even by his stellar standards is enjoying a purple big-race period.

Dettori grabbed the initiative from the start and made most of the running on John Gosden’s winner, ultimately fighting off Aidan O’Brien’s Fleeting by three parts of a length.

“That’s Frankie, you leave him alone when he has a plan and he can go to Plan B quite quickly,” Gosden said. “He has the courage to do that which comes from years of experience and having a clock in your head. He’s rode a quite beautiful race.”