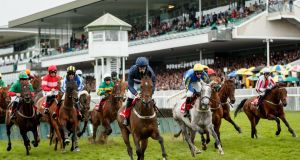 Irish racing’s top official has defended the public appeal of next week’s Galway festival despite a notable slide in crowd figures over recent years.

At the height of the Celtic Tiger in 2006, attendance levels at the sport’s biggest summer festival reached a peak with an official figure of 216,942 over the seven days. Figures tumbled during the following years of the economic crash but despite the subsequent economic upswing crowd levels at Galway have continued to slip.

That was almost 4,000 more than the Thursday, traditionally the busiest day of the year in Irish racing. It was also a long way ahead of the near 17,000 that attended Wednesday’s Plate fixture.

Punchestown’s concluding “Family Day” festival date became Irish racing’s busiest date last year and a 37,206 attendance at that same fixture in May is likely to see that status repeated in 2019.

Horse Racing Ireland statistics for the first half of this year reported a near nine per cent rise in attendance levels overall in Ireland.

That is a pattern HRI’s chief executive believes can be reflected during next week’s Ballybrit action which begins on Monday.

“The numbers going to Galway are huge compared to most other meetings during the year and people go there for a variety of different reasons.

“Comparing Galway with other racecourses is not strictly comparing like with like. There’s a carnival element to Galway, a holiday element. It’s more than a race-meeting in some ways,” Brian Kavanagh said on Friday.

He said he wasn’t concerned about a slip in attendances at Galway and suggested comparisons with Celtic Tiger years are unrealistic.

“I have no fears about Galway. I think what’s happened is that momentum shifts. For example Friday is getting stronger. A lot of people are changing their racing patterns over the course of the week,” he said.

“Galway have done some work on improving their product-offering over the last number of years and I think we will see the effect of that,” Kavanagh added.

Those recent half-year statistics also revealed an 11.5 per cent increase in on-course bookmaker betting so far in 2019. That’s a reversal of a previously remorseless slide in betting ring turnover during the last decade.

“There’s been a consistent lift. It’s still only modest compared to some years ago, but that’s an old story about the nature of betting changing. I’d be hopeful of Galway. The bookmaker ring is stronger this year than other years,” Kavanagh said.

The HRI boss also said on Friday that the progress of remedial work on Dundalk’s controversial all-weather surface this summer will be kept under review.

The surface came under heavy criticism last Spring with the Trainers Association saying most of its membership had lost confidence in it.

Earlier this week Dundalk officials announced a three month resurfacing project will begin in April of 2020.

It also said 54 tonnes of extra fibre will be added to the current Polytrack by the time racing resumes there this September.

“We would have liked to have seen it [resurfacing] done sooner. But our strong preference is that it’s done right,” said Kavanagh who added that Dundalk have received assurances about remedial work allowing fixtures go ahead as planned this autumn and through the winter.

“They’ve been assured the work they’ll do this summer will be sufficient to get them through the time until they do the work next year. Obviously we will keep that under review,” he added.