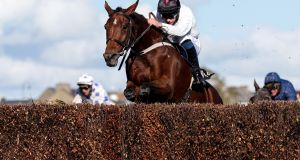 Paul Townend onboard Cabaret Queen on the way to winning the Guinness Kerry National at Listowel. Photograph: Laszlo Geczo/Inpho

Two mares fought out a thrilling finish to the Guinness Kerry National, with Cabaret Queen just holding off the late thrust of Moyhenna.

The Willie Mullins-trained horse, winner of the Munster National last season for her enthusiastic bunch of owners, made just about every yard of the running.

Cabaret Queen had burned off most of her rivals by the second last, but she had been jumping out to her right at most fences and did so again in the straight.

When the 6-1 shot also went right at the last, JJ Slevin, a late replacement for Donagh Meyler, sensed his opportunity against the rail and the Denis Hogan-trained Moyhenna began to gain with every stride.

The pair crossed the line together and there was an agonising wait before judge Jennifer Walsh called the result.

The 11-2 favourite Doctor Duffy was back in third with The West’s Awake, who travelled well for a long way, back in fourth.

“She jumped out of her skin and I don’t think she missed a fence. She got half-lengths and lengths where it mattered.

“Paul said she hadn’t one iota left. It was a last-gasp win and being so brave it would have been hard to lose it, but it’s tough on the runner-up too, who ran a cracker.

“I would have taken a draw coming off the stand as I thought we were beaten.

“Going back into another handicap might be tough and I’m going to look at Graded races or conditions races for her.”

Mullins has been a notable absentee on courses since racing resumed and said: “I said when the owners came back I’d be back, so here I am. It was tremendous that two of the syndicate were here and I’m very happy for them and Jack Cantillon, who put it all together.

“It’s great that HRI have managed to keep racing on. It’s disappointing that more people aren’t allowed, especially for the likes of Listowel, however we have to be thankful for what we have.”

Cabaret Queen was completing a double for Mullins and Townend who had earlier lowered the colours of the previously unbeaten Malone Road with N’golo in the Séamus Mulvaney Bookmaker Novice Hurdle.

Malone Road made a mess of the last flight for Jack Kennedy, but even before then he was under pressure and Townend brought N’golo through a narrow gap between the long odds-on favourite and Wajaaha.

“He was probably fortunate that Jack’s lad let him down at the last, but they are there to be jumped and he left behind a disappointing run the last day,” said Townend.

“We left Kilbeggan scratching our heads a bit, but that was a bit more like it today. He’ll have to build on it, but at least he left the run behind him the last day.”