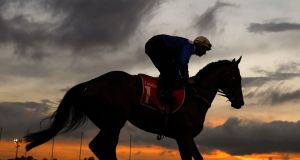 Beating the Australian national institution that is Winx could prove a task beyond even Aidan O’Brien although this is a bank holiday weekend that could help the champion trainer identify potential classic stars for 2019.

O’Brien was denied a Group One success in Melbourne on Friday after Spirit Of Valor was just beaten in the Manikato Stakes. His stable companion US Navy Flag never figured after a slow start.

The race went to Brave Smash whose jockey Hugh Bowman aims for history aboard Winx in Saturday morning’s Cox Plate back at Moonee Valley.

A unique four-in-a-row in Australia’s all-aged championship event will extend Winx’s winning streak to 29 races and cement her place in Australian sporting folklore.

It’s quite an ask then for O’Brien’s Irish Derby runner-up Rostropovich to come out of quarantine and win a first Group One in such circumstances.

The Ballydoyle camp have instead suggested an encouraging run that sets Rostropovich up for the upcoming Melbourne Cup will do fine, apparently leaving Godolphin’s Benbatl to serve it up to Winx in a race off at 7am Irish-time.

Whether there’s a turf horse on the planet capable of serving up enough to dethrone this remarkable seven year old mare is debatable. It’s maybe even less debatable than Too Darn Hot’s status as European champion two year old-elect.

So, rather than concentrating on being an unlikely spoilsport on the other side of the world, O’Brien’s focus is likely to be on a trio of Group One juvenile races closer to home and a chance to pinpoint threats to Too Darn Hot next year.

The race’s capacity for identifying future talent was underlined in 2017 after a finish fought out by no less than Saxon Warrior and Roaring Lion.

That was an eighth win in the prestigious contest for O’Brien and he runs three this time with the supplemented Magna Grecia the likely stable No. 1.

Runner-up to King Persian in a Newmarket Group Three a couple of weeks ago, Magna Grecia’s supplementary entry alone indicates a colt rapidly on the upgrade.

But if he can maintain Gosden and Dettori’s recent hot-streak of Group One success, the conclusion for many will be that Too Darn Hot is an even more outstanding Guineas and Derby prospect.

Seamus Heffernan goes to Paris to ride Norway on whom he won the Zetland Stakes at Newmarket recently over the same mile and a quarter trip. O’Brien has won the race four times before including a decade ago with the subsequent Irish Derby hero Fame And Glory.

Here too the Gosden camp could present the big danger in the shape of the filly Shambolic.

Elite flat racing’s global nature at this time of year is underlined by how Ryan Moore is set to make it from Melbourne to Paris in time for two Group One rides for O’Brien at Chantilly on Sunday.

The Englishman teams up with the Fillies Mile runner-up Hermosa in the seven furlong Criterium International. Ballydoyle also run the colt San Andreas (Donnacha O’Brien) in a race due off at 3.20 Irish-time.

Problems with the ground at Longchamp mean the Group One Prix Royal Oak will also be run at Chantilly on Sunday (2.45 Irish-time.)

Moore teams up with the Irish St Leger winner Flag Of Honour in the €350,000 highlight often regarded as the French Leger. Max Dynamite (Andrea Atzeni) represents Willie Mullins in the nine-runner heat.

Flag Of Honour won it a year ago and the Leger legend Vinnie Roe was Dermot Weld’s last winner of the race in 2000.

The in-form Curragh trainer will hope to bridge the gap though with Masaff, third to Madhmoon and the subsequent Lagadere runner-up Broome here over ‘Irish Champions Weekend’.

Weld also unveils the Aga Khan newcomer Sherkali in a maiden while Jim Bolger’s veteran Flight Risk can put his juniors in their place in the Listed Knockaire Stakes.

Willie Mullins has a runner at Leopardstown, as well as Max Dynamite in France, but has a dozen national runners between over Saturday and Sunday.

They include the 2016 Irish Leger hero Wicklow Brave who looks to have another easy hurdles option open to him at Galway on Sunday.

Before that there will be plenty interest on Saturday in the smart bumper performer Royal Rendezvous appearing over flights in Ballybrit while Poker d’Ainay could also win for Mullins in the bumper.

In other news, Irish jockey Oisin Murphy is free to ride Roaring Lion at next week’s Breeders Cup after picking up a 15-day ban for his ride on Spirit Of Valor on Friday.

The Moonee Valley stewards charged the Kerry man with careless riding and he will miss the ride on Red Verdon in the Melbourne Cup. However he can defer the suspension to start after the Breeders Cup.