No decision on how Samcro will race this winter 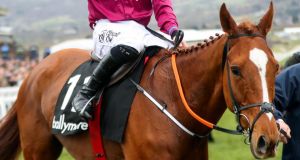 Samcro’s trainer Gordon Elliott has said he would love to win a Champion Hurdle but Michael O’Leary’s Gigginstown Stud team insists no decision has been taken on which code their hugely exciting young star will pursue this winter.

Speculation on whether Samcro goes novice chasing this season or stays over flights has been growing since he dramatically fell on his final start of the last campaign at Punchestown.

The Cheltenham festival winner is a 4-1 second favourite for the Champion Hurdle and when asked on Tuesday in a betting firm column what his preference is, Elliott left little room for doubt.

“I’d love to win a Champion Hurdle but I only train the horse. I don’t own him. I’ll have to talk to the lads and see what they want to do,” he said.

“The way he jumps a hurdle you’d say chasing is going to be his game down the line but it’s not easy coming across a Champion Hurdle horse. I’d love to win a Champion Hurdle, that’s all I can say,” Elliott added.

The Co Meath trainer has won the Cheltenham Gold Cup for O’Leary with Don Cossack in 2015 and last April supplied the Ryanair boss with another Aintree National courtesy of Tiger Roll. A Champion Hurdle would complete O’Leary’s collection of National Hunt racing’s most famous prizes.

However O’Leary’s brother, and racing manager, Eddie O’Leary, insisted that no decision has been taken on Samcro’s future.

“We haven’t even discussed it. It’s a long way down the line,” he said on Tuesday. “He’ll definitely go jumping!”

Elliott had also said: “It’s still up in the air at the moment. He’s in good form and cantering away. He won’t be doing a fast bit of work maybe for another month. Obviously at some stage I’ll have to sit down and talk to Michael and Eddie and we’ll make a decision.

“It’s a pity we didn’t stand up in Punchestown as if he’d gone and won that I’d say we’d definitely be going the Champion Hurdle route.”

Elliott’s immediate big-race focus will be on Sunday’s €100,000 Ladbrokes Munster National in Limerick which he won in 2016 with no less than Tiger Roll.

Elliott has four of the 23 entries left in the race including the topweight Alpha Des Obeaux who was runner up to Total Recall last year when trained by Mouse Morris.