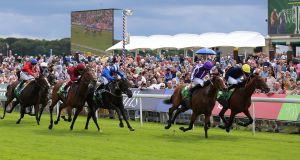 Aidan O’Brien’s faith in Japan was rewarded as the one-time Investec Derby favourite provided the Ballydoyle trainer with a record-equalling sixth victory in the Juddmonte International Stakes at York.

Having rounded off his juvenile campaign with victory in the Beresford Stakes, Japan spent the winter months towards the top of ante-posts lists for the premier Classic at Epsom in early June — but those ambitions were dented after he could finish only fourth in the Dante at York in May.

However, he has made giant strides in the subsequent three months since that reappearance — finishing a half-length third at Epsom before dominating his rivals in the King Edward VII Stakes at Royal Ascot and breaking his Group One duck in the Grand Prix de Paris.

Taking on his elders for the first time on the Knavesmire, Japan was a 5-1 shot in the hands of Ryan Moore, with Sir Michael Stoute’s proven top-notcher Crystal Ocean the 11-10 favourite off the back of his narrow defeat to the brilliant Enable in a King George for the ages at Ascot.

Crystal Ocean battled his way to the front inside the final two furlongs, but despite displaying his trademark tenacity, Japan more than matched him to win a thrilling duel by a head.

O’Brien said: “Ryan was over the moon with him, he’s got better and better. We saw he got a mile and a half and we didn’t want to bottom him today, which is why we came back to a mile and a quarter with the autumn coming.

“We couldn’t be happier and the team back home have done a magnificent job. He had an easy race in Longchamp, it was a steadily-run race and he quickened and got to the front. It was very easy for him and we knew he wouldn’t go and win by far.

“He’s a lovely relaxed horse and loads of class. The first time he showed us that real class was when he won the Beresford when he beat two of ours which we knew were good horses.

“We rushed him to get back ready for the Dante, but every rung has been a step up. The three-year-olds are better than anyone thinks. The King George was a bit of a disaster with the soft ground and it didn’t work, but that wasn’t a true reading of the three-year-old form.”

Paddy Power and RaceBets cut Japan to 5-1 from 10-1 for the Prix de l’Arc de Triomphe at ParisLongchamp, while Betfair offer 2-1 about his chances next month’s Qipco Irish Champion Stakes at Leopardstown.

O’Brien added: “The lads will see what they want to do, but it’ll be something like that (straight to the Arc) and we’ll maybe take in the Irish Champion Stakes on the way.”

Moore is better placed than most to assess the strength of the form, having steered Crystal Ocean to six of his eight career victories.

“We had a lovely trip. He (Japan) is a very straightforward horse and all he’s done is improve since the Dante,” said the jockey.

“He was a very good two-year-old and he hasn’t put a foot wrong. He’s got better and better and he’s a beautiful horse with a beautiful mind. Hopefully he’ll keep on progressing.

“He’s beaten a very good older horse there. I know how good Crystal Ocean is and he’s a very hard horse to get by.

“I thought it was a superb performance.”