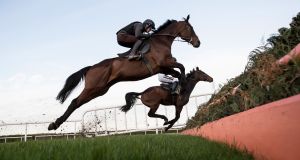 Sunday’s principal Leopardstown focus was on post-race schooling by half a dozen of Willie Mullins’s potential Cheltenham team and while the session might have looked to turn into something of a curate’s egg to onlookers, the champion trainer was focussing on the positive.

Yorkhill repeated his habit of jumping left, and a little big, during a circuit of the track under Ruby Walsh, although Mullins confirmed the horse is on course for the JLT at the festival.

“He went left over the first couple, and then jumped huge at the first down the back and frightened himself,” Mullins said. “But Ruby said he was electric after that. We might give him another schooling session but there’s no change to the JLT plan.”

Earlier, Walsh had ridden the leading Gold Cup Djakadam over a circuit but wound up with only the Arkle hope Royal Caviar for company after Bellshill and Patrick Mullins took a crashing fall at the first fence the trio jumped.

Bellshill, who is in line to run in the RSA, was described by Mullins senior as moving a “little gingerly” afterwards, but the trainer added: “Rule Supreme fell here as well and he went on to win the RSA [in 2004]. I’m determined to look at the positive.”

Mullins indicated Blazer, who accompanied Yorkhill and the possible four-miler candidate, Arbre De Vie, is badly handicapped in Britain and may skip the festival.

Up to 60 horses either worked or were schooled after racing, including the Grade 1 winner, Zabana, and the champion hunter chaser, On The Fringe.

Earlier in the day, Mullins praised jockey Jody McGarvey for a remarkable recovery on the JP McManus owned 15-8 favourite Great Field at the final fence of the novice chase.

Great Field had the race sown up, and jumped the fence well, but stumbled on landing, all but sending McGarvey out the side-door.

McGarvey received widespread coverage in 2015 when memorably pushed back into the saddle during a race at Roscommon, but he needed no help to recover this time and with just one foot in an iron he kept Great Field going for an eight length win.

“A great performance by horse and rider. Jody did exceptionally well,” summed up Mullins, who will bypass Cheltenham with the winner.

Rachael Blackmore extended her lead at the top of Ireland’s conditional jockeys table when Camlann scored on Sunday, but race conditions mean she can’t ride in Cheltenham’s conditional event.

Too old to ride

At 26, the country’s top female jockey is a year too old to ride in the Martin Pipe Hurdle, although Blackmore still hopes to ride at the festival on the ‘Shark’ Hanlon trained Linger in the Fred Winter Hurdle.

After a Navan double on Saturday, Camlann’s Sunday victory means Blackmore is on 26 winners for the season, four ahead of her nearest rival, Donagh Meyler, who later scored on Paper Lantern, in the race to be Ireland’s top claiming rider.

“Saturday was my first winner off a 3lb claim and I never envisaged that things would go so well. But I don’t like talking about that [conditional title]. There are a good few weeks left,” she said.

Blackmore won on Linger in Ludlow in November and the four-year-old scored at Market Rasen a month later. “I’m in the shake up to get the leg up,” the in-form rider confirmed.

Camlaan completed a double for Hanlon who had earlier scored with the veteran Hidden Cyclone in Leopardstown’s final National Hunt card of the season.