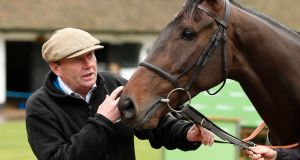 Nicky Henderson’s Buveur D’Air is a favourite with some bookmakers for the Champion Hurdle. Photograph: Matthew Childs/Reuters

Noel Fehily is expected to replace Barry Geraghty in the saddle aboard Buveur D’Air in the Champion Hurdle. The six-year-old, who has been at the top of the betting on the race since a smooth success at Sandown last month, is one of many JP McManus-owned horses that need a jockey for the Festival in a fortnight’s time, following the chest injuries sustained by Geraghty on Saturday.

Nicky Henderson, trainer of Buveur D’Air, indicated on Wednesday that Fehily is likely to be back aboard the horse. “I suspect so,” he responded when asked about the subject. Fehily was retained by Buveur D’Air’s previous owner and has ridden the horse in six of his 11 races, winning a Grade One at Aintree on him last spring.

Henderson added: “I saw JP on Monday and I don’t think anybody’s really discussed it because there’s so many horses involved in the conundrum. Obviously we’ve got My Tent Or Yours in there [the Champion Hurdle] as well.”

The Lambourn trainer predicted that Mark Walsh, who rides many McManus horses in Ireland, would come in for a number of the rides Geraghty would otherwise have had. “There are a lot of jockeys that do know some of the horses.”

McManus also has the Alan King-trained Yanworth in the Champion Hurdle and some firms have him as 7-2 joint-favourite with Buveur D’Air. Asked about who was likely to ride Yanworth, King replied: “I’ve no idea. We’re going to speak at the weekend. We do need to find out. Whoever it is, I’d like them to come and sit on him and have a school beforehand.”

Do you have a preference? King was asked. “Yes, but I’m not saying anything,” he replied, laughing. Geraghty is the only jockey who has ridden Yanworth over hurdles. King is likely to want to use Wayne Hutchinson, who has been the principal jockey at his Wiltshire yard for several years.

Fehily is also thought likely to come in for the ride on the Stayers’ Hurdle favourite, Unowhatimeanharry, having won a Grade One on him at the last Festival before McManus bought him. Harry Fry, who trains the 11-8 hotpot, said no decision had yet been taken.