Nigel Twiston-Davies hoping to double up once again at Cheltenham 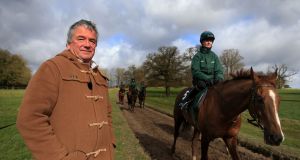 When Nigel Twiston-Davies saddles a winner at the Cheltenham Festival, the next one is rarely too far away. He had a double on the second day last season and a treble, including the Gold Cup with Imperial Commander, in 2010, and two winners at the meeting in 1993, 2009 and again in 2013.

“As everyone always says, we’ll settle for one,” Twiston-Davies said here on Thursday as he cantered his team for this year’s meeting, but there was a distinct sense that, deep down, he is hoping for more.

In terms of number of winners and prize money earned, this is already certain to be Twiston-Davies’s best season since at least 2010, and a good Cheltenham could make it the best of his career, even before Blaklion heads to Aintree as a leading candidate for the Grand National.

It is rare for a trainer to seem confident about a runner in a Festival handicap, but from a team that includes Ballyandy, a possible favourite for the Supreme Hurdle, and Wholestone, third-favourite for the Albert Bartlett, Twiston-Davies feels that Foxtail Hill, the 10/1 joint-favourite for the Close Brothers Novice Handicap Chase, could be his best chance of the meeting, with Ballyandy not far behind.

The two horses will bookend the trainer’s opening day on March 14th, and Twiston-Davies laughed off a suggestion here that the lack of a winner from his yard since February 11th should be any cause for concern. “It’s the most ridiculous thing I’ve ever heard,” Twiston-Davies said. “At this time of year, it’s quite difficult. You’re waiting for the Festival with all your good horses.

“People look at the figure and they don’t look at the fact. At the moment they’re all fine, there’s absolutely nothing wrong with any of the horses, and Blaklion wasn’t too bad, was he [when second in the Grand National Trial at Haydock]?”

Ballyandy, who took one of the season’s most valuable prizes to date in the Betfair Hurdle last time out, landed the Champion Bumper at last year’s meeting and is due to face a field that includes Moon Racer, the 2015 Champion Bumper winner, who beat him by nearly three lengths over the Supreme course and distance in November.

“He cantered to the last in the Betfair and then quickened away nicely,” Twiston-Davies said. “We’ve always thought an awful lot of him and I can’t understand why he didn’t do better in his first three races, but he managed to handicap himself nicely and let’s go on to better things now.

“He’s got plenty of speed and he won there this time last year, over two miles but with no hurdles. We’re really looking forward to it and hopefully we’ll be able to take our revenge on Moon Racer.

“I think Foxtail Hill is our best chance. It’s just the way the race turns out, it’s a very compressed handicap with 3lb or 4lb between the whole lot of them. He’s nearly a [Grade One] JLT horse, but why go for that when you’ve got that lower-class race?”

Imperial Commander went under the radar in 2010 when the attention of most punters was focused on Kauto Star and Denman, and Twiston-Davies feels the same could be true of Bristol De Mai in this year’s Gold Cup following a disappointing run last time out.

“I couldn’t understand it with Imperial Commander but I can understand it with him because it wasn’t a great run at Newbury, ” the trainer said. “He was very good at Haydock [when winning the Peter Marsh Chase] and we can put a line through Newbury, he just wasn’t himself that day. When he got back he was very lame and had a whole week of not being right.

“He’s come right now and if he can stay sound, I’m very hopeful. He’s very much a horse who goes his own pace, he’ll be right up there in the front line but he’s settling a lot better now. He stays, he jumps, he’s uncomplicated.”

Even a second victory in the Gold Cup might not be the highlight of Twiston-Davies’s Festival if The New One, the Neptune Novice Hurdle winner in 2013, could take the Champion Hurdle at the fourth attempt.

“It would be wonderful, that would be the highlight of everything,” Twiston-Davies said. “He’s been so brilliant for us over the years, it’s time it happened for him really.

“He was desperately unlucky in his first one, he was definitely knocked back [by a faller] further than he was beaten. Hopefully this will be the year when everything falls right for him.

“We’re happier with him than we have been for a long time. He’s had soundness issues in the past, but this year since October he hasn’t had an unsound step.

“I don’t think his age makes any difference, he didn’t seem to be showing it when he won the International Hurdle at Cheltenham [in December]. He never seems to sparkle at Haydock but he keeps winning there, and back at his favourite course, he’ll be flying up the hill.”

1 Dave Hannigan: Trump gets the clubs back out as death toll keeps rising
2 Safe return to play in New Zealand showcases the true value of sport
3 Dr Bob Rotella: ‘If you focus only on the target you’ll play darn good golf’
4 Science shows that sports events going ahead was ludicrous
5 Zoom calls with Rory and the GUI bake-off: Neil Manchip keeping the flag flying
Real news has value SUBSCRIBE