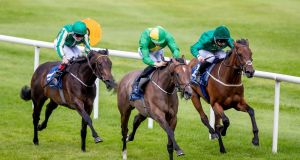 The Ken Condon-trained Miss Amulet has a rare Group One ‘rags-to-riches’ outcome in her sights at Newmarket on Saturday.

Bought for just €7,500 as a yearling – having gone through the ring as a foal for just €1,000 – Miss Amulet is among the favourites for the Juddmonte Cheveley Park Stakes.

The fact Ryan Moore rides for the first time in the Coolmore silks of the filly’s new ownership is an indication of how much Miss Amulet has already bucked the odds of a lowly beginning.

There has been speculation that it took a high six-figure purchase price to buy her after an exciting Group Two success in last month’s Lowther Stakes at York.

However that would look something of a bargain if she can score at the top-level and potentially tee up Classic ambitions in 2021.

Much of the top weekend activity on both sides of the Irish Sea revolves around two-year-old action and an eye on a future that looks more unpredictable than for generations due to coronavirus.

The Cheveley Park has been in place since 1899 to identify the speediest two-year-old fillies, a role Saturday’s other Group One, the Middle Park Stakes, has had for colts since even before that.

Jessica Harrington’s Lucky Vega leads a three-pronged Irish raid on the Middle Park, dropping back to the six-furlong trip over which he scored at the top level in the Phoenix Stakes.

Lucky Vega has already made his €175,000 yearling purchase price look cheap and will be in line for championship honours if able to beat opposition that includes the Queen’s runner, Tactical, in style.

However a win for Miss Amulet in particular would inject some welcome feel-good factor into a sport facing a grim economic outlook and widespread fears of an exodus of owners from the middle and lower tiers.

Condon’s previous Group One successes were with Romanised and he’s hopeful one of his new two-year-old stars can step up.

“She’s a very progressive filly. I thought it was a good performance at York and she’s done very well since. She needs to step up again but all the signs are good. She deserves to take her chance in a Group One now,” he said on Friday.

Aidan O’Brien bids for a seventh Middle Park with Lipizzaner but 15 minutes later will also attempt a remarkable statistical feat at the Curragh.

The champion trainer is chasing a 10th win in a row in the Group Two Alan Smurfit Memorial Beresford Stakes and a 20th win in all in the historic race.

The equine Johan Cruyff was the first of them in 1996. Since then O’Brien has dominated this race – which over the years has thrown up superstars such as Nijinsky and Sea The Stars – like no other.

High Definition, a brother to last year’s winner, Innisfree, appears to be the pick of a Ballydoyle trio this time. On drying ground, however, it could be Lucky Vega’s stable companion, Ace Aussie, that emerges on top.

Man United’s latest Parisian party more impressive than heist of 2019 09:45
Lions to play Japan on home soil before tour to South Africa 09:26
Tiger Woods in the groove as he plots a path to Augusta 09:22
No underage or minor GAA to be allowed under Level 5 Covid-19 restrictions 08:53
Ole Gunnar Solskjaer hails players after win over PSG 07:57
Here is your handy guide to sport on television this week