Crowds of 90,000 would normally flood the north Kerry town for the week-long run 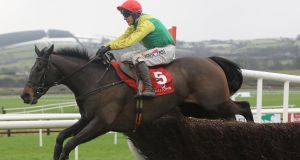 Sizing John has been forced to retire after sustaining a career-ending injury on Thursday. Photograph: Lorraine O’Sullivan/Inpho

An estimated €20 million hole in the local economy is anticipated ahead of the Listowel festival which begins on Sunday.

Although from Monday owners are allowed go racing for the first time since March the absence of spectators will make for a very different renewal of one of Irish racing’s most famous dates.

Up to 90,000 people would normally be expected through the gates over seven days. However the coronarvirus pandemic ensures the 2020 ‘Harvest’ festival will be a hollow experience in comparison.

Behind- closed-doors restrictions were eased a little when the Government announced earlier this week that crowds of up 200 are permitted at large outdoors facilities under Level 2 of its Living with Covid roadmap.

Horse Racing Ireland is in communication with owners of horses expected to line up at Monday’s two fixtures in Listowel and Fairyhouse.

However the absence of paying customers at the gate will have a major impact not just on the racecourse in Listowel.

“It’s got a huge knock-on impact on the tourism business in north Kerry. Pubs, hotels and B&Bs always look to this as their harvest,” said HRI’s chief executive, Brian Kavanagh, on Friday.

“Listowel [racecourse] will lose their gate revenue, their hospitality and the catering revenue. They will still retain a good portion of media rights revenue. But there will be a significant impact,” he warned.

“There will be 200 people maximum and they will be owners. We have said owners are the priority, whether it is 20 owners, 50, or 200. We will play that by ear. Technically you could have sponsors or some guests but that is ultimately a matter for the racecourses,” said Kavanagh.

“Listowel will have big fields [of runners] but they will still have 100 to 120 runners on a day. So I don’t expect that to be fully subscribed. [But] anyone rocking up who is not screened and who is not registered won’t be permitted to come in,” he added.

Sunday’s behind-closed-doors action at Listowel will also be without the retired former Cheltenham Gold Cup hero Sizing John who had been due to run in the featured Kerry Group Chase until sustaining a career-ending injury on Thursday.

Some quality names remain among the half dozen runners who will compete over a track that will continue to be watered over the weekend.

The popular Peregrine Run should thrive on quick going and will try for an 18th career victory.

However he looks to face a major task on official ratings against The Storyteller, who is 7lbs ‘well-in’ with his rival at the weights.

Both horses are at the top of the handicap for Wednesday’s festival feature, the €150,000 Guinness Kerry National.