Mullins hopeful Down Royal won’t be impacted by Brexit 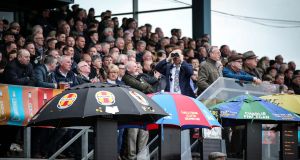 Down Royal officials believe it’s unlikely their biggest meeting of the year will be significantly affected in the event of no-deal.

Willie Mullins has downplayed fears the impact of a no-deal Brexit might have on Down Royal’s upcoming ‘November Festival’ dates. The two day fixture, highlighted by the €150,000 Ladbrokes Champion Chase, begins the day after the current Brexit date of October 31st.

Concerns have been voiced about cross-border travel arrangements involving animals in the event of a no-deal. However Mullins, the champion National Hunt trainer, suspects any repercussions of such a scenario will not be felt immediately by those crossing the border to either of the north’s two racecourses.

“I would be confident that whatever happens it will take a while to implement whatever new rules will be in place. It won’t happen on day one I would imagine. I’m not forecasting any problems in that regard. I imagine it will take months to sort things out,” he said on Monday.

Down Royal officials have also suggested it’s unlikely their biggest meeting of the year, featuring the first Grade One of the National Hunt season, would be significantly affected in the event of no-deal. Instead the track’s chief executive Emma Meehan has pointed to its Christmas date on St Stephen’s Day as more of a concern.

However Mullins is confident Irish racing, which is regulated and run on a 32-county basis, will be able to cope however the political situation unfolds.

“Racehorses are very well regulated. The whole industry is well regulated so it should be easy enough to put in place whatever protocols and changes will be demanded,” he said.

Mullins won the first renewal of Down Royal’s Champion Chase with Florida Pearl 20 years ago but hasn’t landed the prize since. His triple-Grade One winner Kemboy is one of a dozen entries for this year’s contest. It is the British champion Paul Nicholls who is the most successful trainer in the race with four victories including the legendary Kauto Star in 2010.

Nicholls has indicated his intention to travel to Down Royal with the reigning King George VI Chase champion Clan Des Obeaux. Michael O’Leary’s Gigginstown Stud team has won the race for the last six years and the Ryanair boss has eight of the 12 horses left in the big race.