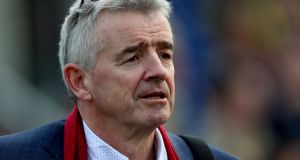 Michael O’Leary: his Gigginstown Stud team believes the King George VI Chase might be boosted by including the Ladbrokes Champion Chase at Down Royal in the £1m Triple Crown bonus. Photograph: James Crombie/Inpho

A border down the Irish Sea is a topical subject, but Michael O’Leary’s Gigginstown Stud team believes the King George VI Chase might be boosted by including Northern Ireland’s most valuable race in steeplechasing’s £1 million Triple Crown bonus.

Jockey Club Racecourses operate 15 tracks in Britain, and has once again offered a £1 million bonus to any horse that wins the Betfair Chase, the King George at Kempton and the Cheltenham Gold Cup in March.

Lostintranslation landed last month’s Betfair Chase at Haydock and is second favourite for next week’s King George. Colin Tizzard’s star is 12-1 to become just the second horse to land the Triple Crown bonus. The legendary Kauto Star managed the feat in the 2006-07 season.

Kempton’s highlight is shaping as an exciting renewal with the prospect of Lostintranslation taking on the ante-post favourite Cyrname. The latter’s stable companion and last year’s winner Clan des Obeaux is also in the mix.

However, once again it appears none of Ireland’s leading staying chasers will line up at Kempton, many of them opting instead to stay at home for Leopardstown’s Savills Chase two days afterwards.

Kicking King was the last Irish-trained winner of the King George when scoring back-to-back victories in 2004-05. The last major raid on the race from Ireland was in 2015, when Vautour got narrowly denied by Cue Card and Don Cossack fell at the second last.

On Monday, O’Leary proposed that the Ladbrokes Champion Chase at Down Royal in early November be installed as a separate first leg to the Triple Crown in the hope it might encourage greater Irish participation in the King George.

“It’s very remiss of them not to allow Down Royal be a first leg in Ireland ,alongside the Betfair Chase at Haydock. You could have two first legs, with the winners of both meeting in the King George, and the winner there then going on to the Gold Cup.

“I don’t know why Down Royal aren’t pushing for that because the English leg, the Betfair Chase, who’s going [from Ireland] to the Betfair Chase? You wouldn’t cross the road to it,” he said.

“If the Down Royal race was a first leg here it would encourage the winner of that, and the Betfair Chase, to meet in the King George. It would be good PR, particularly with Down Royal being in the UK,” O’Leary added.

Gigginstown have won the Down Royal race for the last seven years, including last month with Road To Respect, who still holds a King George entry. O’Leary, however, confirmed he was staying at home over Christmas for the Savills Chase.

The Triple Crown concept was first introduced in 2005 as an initiative by the Betfair company and ran until 2010. Jockey Club Racecourses, which operates 15 tracks in Britain, including Haydock, Kempton and Cheltenham, reintroduced it in 2015. That season Cue Card’s chances of scooping the prize ended when falling at the third last in the Gold Cup.

Earlier this year Jockey Club Racecourses marketed the bonus as being offered to any horse which can win the three most prestigious Grade One staying chases in the 2019-20 season. The bonus is covered by an insurance premium funded out of marketing budgets to promote the three races.

In response to O’Leary’s comments, a Jockey Club spokesperson said: “The Jockey Club Chase Triple Crown comprises the three best Grade One staying chases in Britain, all staged at our racecourses.“We were pleased to welcome Gigginstown’s Outlander to Haydock Park for the first leg in 2017.”

Down Royal’s chief executive Emma Meehan said O’Leary’s proposition might be something she would look at in 2020.  ”It would be something we will investigate. It would interest us getting involved in something of that magnitude.”

O’Leary indicated Road To Respect would be joined by Delta Work in Saturday week’s Savills Chase. They will comprise a typically strong Gigginstown team in a race it won four years in a row before Kemboy interrupted the pattern last year.

Road To Respect was a beaten favourite in third last year, but returned to action in style last month when proving four lengths too good for Clan des Obeaux at Down Royal.

“Hopefully we’ll run what we can in that race. All being well Road To Respect goes there and so will Delta Work,” said O’Leary.