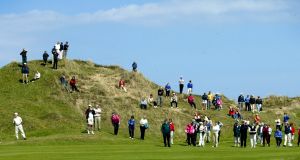 The Island Golf Club is only a few hundred metres across the estuary from Malahide but to get their by car involves a 13km trip. Photograph: Morgan Treacy/Inpho

As if the rules of golf weren’t complicated enough, another one has been added to golfing parlance: the 5km rule; and – already – before golf clubs even get a chance to take tentative steps back towards economic recovery, golf’s inclusion in phase one of the Government’s roadmap in relaxing lockdown restrictions on May 18th, has opened a can of worms with club members divided into two camps, those who can play and those who can’t.

Those living within the 5km limit can get swinging again; those living outside the 5km radius must wait for the next phase on June 8th when that exclusion zone is extended from 5km to 20km. It will be July 20th before it is extended beyond 20km. Simple, you’d think? In theory, yes. In practice? Well, that’s another matter entirely, as clubs – and players – grapple with a different kind of physical distancing as the ramifications of the 5km rule is taken on board.

A strong indication of the challenges facing many clubs is that of Rathdowney Golf Club, in Co Laois, who pointed out that only nine of its membership lives within the 5km radius!

Unquestionably, rural clubs – given the location of many courses and the spread of membership – will find the whole 5km distancing a juggling act of sorts. But urban clubs, too, given the nature of membership residency, find a situation where members paying the same annual fees will be divided into those who can play on May 18th and those who can’t. Who will police it? Can it be policed? Or, just like the rules of golf, will it be a matter of self-policing, when a different kind of integrity will be required?

Here’s another one: say you’re a member of The Island Golf Club in Donabate, Co Dublin, and living in Malahide, which comprises a large contingent of its membership base? The distance from one location to the other (across the estuary) is a couple of hundred metres. But, to actually get from one to the other necessitates a road trip of 13km.

A spokesperson for the Department of Health confirmed to The Irish Times that only essential journeys can exceed the 5km travel limits and that going to play golf does not come under that remit.

Golf is an all-island sport, but these new measures apply only to the Republic, while golf clubs in Northern Ireland must await further updates from Stormont on when and in what circumstances golf resumes there.

Another issue facing golf clubs will be in how to cater for over 70s, an age profile which comprise a significant membership of golf clubs.

A comprehensive report carried out by the Economic and Social Research Institute (ESRI) for the Confederation of Golf in Ireland (in 2017) found that more than 20 per cent of male membership of clubs were aged over 70, while almost eight per cent of women’s membership were in that age demographic.

In that ESRI report, it was noted the “unique appeal” of golf to the older population and noted, “for older people in particular, the recorded level of regular physical activity is likely to be highly beneficial.”

Given how that age group have been “cocooned” as part of the Covid-19 restrictions, that beneficial effect will add weight to getting the over 70s back playing again. Possibly in pods of their own age group for starters.

The two governing bodies for the sport in Ireland, the Golfing Union of Ireland and the Irish Ladies Golf Union, are finalising a protocol on the safe resumption of play which will be issued to all clubs this week. It is expected to emphasise the requirement to follow health guidelines for the return to safe play with physical distancing, extended breaks between tee-times, no rakes in bunkers and measures to ensure flagsticks are not touched during play. The recommendation for this first phase of resumption is that clubs only allow members to play in small units.

For those fortunate to live within 5km of their clubs, the time to get back on the fairways is nigh, a fortnight away. For the many members who live outside that radius, especially those on the margins, it is a conundrum akin to pondering whether to give a putt in a matchplay match: is it close enough, or too far?