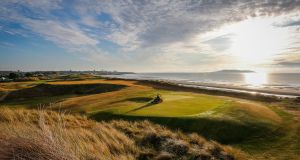 Head greenkeeper Pat Foy cutting greens at daybreak at Corballis Golf Links in Donabate. The public course is one of hundreds of Irish clubs that have been forced to shut their doors due to the coronavirus pandemic. Photograph: Crispin Rodwell

For golf clubs, a different kind of waiting game is on the cards. Following on from the news that an initial 5km travel limit will be in place for those playing on golf’s resumption come May 18th – a distance limit which one club official claimed, “blindsided us” – there is the wait for official protocol to be delivered to clubs later this week on how to implement safety guidelines.

However, it would seem that the two governing bodies of the sport in Ireland, the ILGU and the GUI, along with Golf Ireland, are singing off the same hymn sheet in putting public health ahead of golf in insisting that members adhere to the 5km restriction.

As Sinéad Heraty, the chief executive of the ILGU, put it when speaking on RTÉ Radio News at One on Monday: “I don’t think anybody could say that playing a round of golf is critical in terms of overall public health. We would be advocating the 5km limit for golf is maintained and that’s what Government guidelines are saying.”

The loosening up of Covid-19 restrictions in the Republic has seen golf included among the first phase of the recovery roadmap, with the travel limit being increased in phases (to 20km on June 8th and then beyond 20km on July 20th). Golf clubs in Northern Ireland remain in the dark about any possible resumption date.

“I think it is critically important that all players who have the opportunity to play within the regulations issued by the Government adhere to those regulations; and, particularly in golf, we are very fortunate it is a sport where people are very used to following the rules,” said Heraty.

In appealing to club members not to breach the distance limits when the sport restarts under phase one of the coronavirus relaxation, Heraty added: “The protocols we have designed so far and will be issuing to clubs by the end of this week are very specific in terms of how the game can be played safely. The first and foremost thing is that this is a public health issue and the regulations must be followed.”

The ILGU and GUI, working with Golf Ireland, which is set to become the only governing body come January 2021, has been engaging with Government agencies in recent weeks to enable golfers get back onto the fairways and has delayed issuing the protocols to golf clubs to allow for further consultations. “(There are) a couple of points from the roadmap shared on Friday that [we] want to confirm before issuing this protocol,” said a spokesperson.

With May 18th pencilled in as the date for the resumption of playing golf, but only for those members living within the 5km travel limit of their club, golf clubs are awaiting those protocols from the governing bodies to be issued, before the end of this week.

However, it has already been determined that clubs won’t be allowed to hold any competitions while clubs have also been advised not to put up any timesheets (all online) yet so that suggested protocol on the gaps between tee times and size of groups can be adhered to.

The 5km restriction on members travelling to their clubs will put a different kind of pressure on many rural clubs particularly, given that – in many cases – the majority of members reside beyond that distance. A number of clubs are left in the position of waiting to assess the protocols due to be issued to see if it is worth reopening at all on May 18th, or to wait until the phase two measures on June 8th. The waiting game is set to go on in more ways than one for them.

Meanwhile, with tour players too restricted in their movements, a number – among them Lee Westwood, Bernd Wiesberger and Martin Kaymer – are to take part in a virtual tournament played over a number of weeks with rounds at courses including St Andrews, Valderrama, Munich, Royal Portrush and Wentworth.

The innovative five-week long event will feature rounds at the tour venues – to be called the BMW Indoor Invitational – will use Trackman technology and be streamed on various social media platforms, including the European Tour. The first tournament, with $10,000 to the winner’s chosen charity, takes place over the Old Course on Saturday.

Rufus Hack, the European Tour’s chief content officer, explained: “While the absolute priority for all of us has been, and continues to be, public health and wellbeing, we also recognise that golf fans are missing watching the leading players compete. Hopefully, the BMW Indoor Invitational can help fill the void, whilst also benefitting charities or relief funds which have been so essential in the battle against the Coronavirus.”