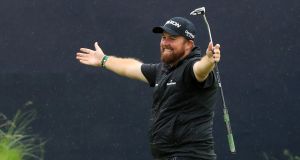 Shane Lowry would love to team up with Rory McIlroy at the Ryder Cup at Whistling Straits. Photograph: Andrew Redington/Getty Images

Shane Lowry – stuck in lockdown in Florida while awaiting the return of the PGA Tour season, most likely in mid-June – has name-checked a couple of actors who might play him should his real life ever be moved onto the screen.

“They would have to be fat and have a beard,” said Lowry when posed by the question by Paddy Power in an Instagram live question and answer session.

So, who did he nominate?

Well, one option would be Jack Black – the star of School of Rock – and the other possibility would be Zach Galifianakis, who played the role of Alan in The Hangover.

On a more serious note, Lowry – still with his eye on making Pádraig Harrington’s team for the Ryder Cup if and when it takes place, with it still in the schedule for Whistling Straits in September – has aimed high in selecting his likely partner for that match.

In taking the advice of Graeme McDowell to “pick a good partner”, Lowry has gone with world number one Rory McIlroy as his go-to man. “I think myself and Rory would go well together. It would be nice to be paired with the best player in the world. I’d play with anyone to be honest but playing with Rory would be pretty good.”

Cejka checks in at mini-tour and checks out with win

Ever hear of the Parker Open? Nope? Neither had Alex Cejka, until word reached him that the mini-tour event was going ahead at the Emerald Canyon Country Club just over 90 minutes drive from his home in Arizona.

The upshot was that the German escaped to the golf course and claimed another win to add to his European Tour and PGA Tour wins, although you can bet your bottom dollar few of his other victories – among them the Volvo Masters way back in 1995 when he held off none other than Colin Montgomerie – were as unlikely as this latest addition to his CV.

Cejka’s win over the weekend was on a course where there were no rakes in the bunkers, only one player per cart and with foam in the tin cups to prevent the golf balls from reaching the bottom.

With golf deemed an “essential service” in the state of Arizona, the mini-tour event went ahead with Cejka covering the stretch from the 14th in six under, thanks to a hole-in-one and an eagle along with a par-saving 20-footer on the 18th to force a playoff with Ed Olson. His reward? $4,125 to go along with the $12 million in career money he has won on the PGA Tour.

What started out as a 220 seconds video outlining a chipping drill in his back garden – first posted on March 16th – has developed into a fascinating insight into the workings of Pádraig Harrington, who has posted no fewer than 53 dedicated coaching drills, filmed by son Paddy mainly in the family garden and some indoors.

“I’ve got my golf clubs in the room but I can’t chip or putt as I don’t have any golf balls in the bag. So, I’m just exercising a little bit, resting, playing online games and watching movies to pass the time” – Kiradech Aphibarnrat, speaking to the Bangkok Post after returning to Thailand from Orlando, and currently in 14-day quarantine.

She was christened Patricia Jane Berg, was known as Patty Berg throughout her career and also had the moniker of “Dynamite” for how she played the game. In fending off Wifi Smith to win the 1957 Western Open at Montgomery Country Club in Alabama by one stroke, Berg claimed the 14th Major title of an illustrious career that would see her set the career record of 15 by the time she put away her clubs.

Berg took a convoluted route into golf, actually preferring to play American football in her youth until persuaded by her parents to take up golf as a teenager. From Minneapolis, Berg enjoyed a great amateur career before turning professional, one of the 13 founders of the LPGA Tour.

The Western Open was a particular favourite of Berg, who won the title no fewer than seven times: on four occasions when it was a matchplay, including beating the legendary Babe Zaharias at the 37th hole of the 1948 final, and then a further three times when it became a strokeplay championship. Berg’s win in 1957 was achieved after a great battle with Smith and she would go on to retain it again in 1958, when victory gave her a record 15th Major career title.

To this day, the LPGA Tour recognise Berg’s contribution to the professional game by awarding the Patty Berg Award, established in 1978, to the “lady golfer who has made the contribution to women’s golf during the year.”

During a round, a player’s ball is embedded in a bunker when play is suspended due to the threat of lightning. During the suspension in play, the course maintenance staff prepare the bunker to its original state so that when he returns to play his shot, the surface of the sand is now smooth. Is be required to recreate the original lie?

In this circumstance, Rule 14.2d (where to replace the ball when original lie altered) does not apply and the player is not required to re-create the original lie. The player must resume play by placing a ball on the estimated spot from which the ball was lifted, even though this will be on the surface of the sand and not embedded.