WHO warned that excessive alcohol consumption will only weaken immune system 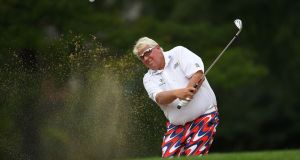 John Daly has long been a supporter of US president Donald Trump. Photo: Stacy Revere/Getty Images

As the world scrambles to find a cure to coronavirus, there is one self-administered treatment that is undoubtedly not going to provide the solution: 40 per cent proof alcohol.

The World Health Organisation (WHO) has warned that excess alcohol consumption may weaken the body’s immune system and render people vulnerable to contracting Covid-19. So it was surprising that John Daly, the two-time Major winner from California, should have posted a video earlier this month suggesting vodka could combat the virus.

It was doubly surprising that Donald Trump’s golf company, Trump Golf, should then have retweeted the video on its official Twitter feed.

Daly’s comments – ill-judged joke or ignorant conviction, it’s hard to say – were posted to YouTube. The two-time major championship-winner begins the video by praising Trump Golf courses, then extends his hope that everyone listening remains safe from Covid-19.

A big thank you to @PGA_JohnDaly who has always been one of our biggest fans. John thank you for the friendship. Everyone at @TrumpGolf truly loves you! #StaySafe #AmericaTogether pic.twitter.com/coWifMSa3W

That’s when his remarks, first reported by Golfweek, take a contentions turn. “I kinda got a cure for this,” he says, grabbing a frosted bottle of the Polish vodka, Belvedere.

“I only drink one drink a day, it just happens to be a bottle of good ol’ Belvedere. You just drink one of these a day. You know, sippy sippy on a little McDonald’s Diet Coke … And that’s the way you kill this coronavirus, I believe.”

The video, coming from a celebrated golfer who wrestled with alcohol addiction over many years, may have attracted scant attention had it not been spotted and amplified by Trump Golf.

The company tweeted “a big thank you” to Daly on April 9th, calling him “one of our biggest fans”. In the process, it reposted the golfer’s video making no reference to his irregular remarks about vodka.

Daly is indeed one of Trump’s biggest fans. In August last year they played golf together at the Trump course in Bedminster, New Jersey, where Trump wore a Make America Great Again hat and Daly sported Stars and Stripes golfing shorts. “I’m proud to be an American, especially with this man leading our country,” Daly said. – Guardian