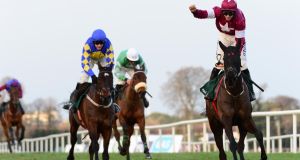 Jack Kennedy looks all but certain to miss next month’s Cheltenham Festival after breaking his leg at Leopardstown on Sunday in the very next race following his Paddy Power Irish Gold Cup success on Delta Work.

The highs and lows of the toughest game of all were starkly underlined in the aftermath of one of Kennedy’s greatest victories on day two of the Dublin Racing Festival.

The 20-year-old’s big-race touch was advertised once again on Delta Work as the Michael O’Leary-owned star gave both Kennedy and trainer Gordon Elliott their first victories in the festival’s €225,000 centrepiece.

In the very next race, however, Kennedy was unseated from Dallas Des Pictons at the first fence in front of the stands.

After being transferred to St Vincent’s Hospital in Dublin, X-rays revealed he has fractured his right leg.

“He has a fracture of his right femur. It is expected he will have surgery tomorrow,” said a spokesman for the Irish Horseracing Regulatory Board on Sunday night.

No timeframe has been given for when Kennedy can be expected to return to action. But with the Cheltenham Festival starting in just over five weeks it is apparently all but impossible that he might be able to return in time.

It is another devastating blow to the 20-year-old rider, who has been plagued with injury problems and only made it back in time for the weekend’s action following a recent collarbone problem.

Delta Work proved resounding reward as the 5-2 shot, whose participation had been put in doubt the previous day due to concerns about the ground, pushed himself into the first rank of contenders for next month’s Cheltenham Gold Cup.

The Savills Chase winner over Christmas was again produced late by Kennedy and even a final-fence blunder couldn’t prevent Delta Work proving a length and a half too good for the 5-4 favourite Kemboy.

“These two races he’s won are the races Gold Cup horses run in and he’s won them, so he has to be a contender. He was brilliant and never put a foot wrong. He just got in under the last. He’s a bit more clever than I was as I was going for a big one,” Kennedy said afterwards.

“The one thing we’ve learned about this horse is to put him to sleep and get him popping away. Our horse is improving the whole time and we can dream about a Gold Cup now,” he said.

Chris’s Dream missed the big race due to the going and Delta Work got the green light to run after Elliott and Gigginstown’s Eddie O’Leary walked the track.

O’Leary had been critical of Saturday’s ground conditions when four horses were taken out due to going which was officially ‘yielding’ after watering.

That watering continued overnight and into the morning and O’Leary commented after the big race: “In fairness to Leopardstown they’ve done a superb job with the ground today. If they’d done that for yesterday there would have been no criticism.”

Rachael Blackmore was the leading figure on the festival’s opening day with a Grade One double, highlighted by Honeysuckle’s Irish Champion Hurdle success.

However, a day later she came back to earth with a bang when the red-hot 1-3 favourite Aspire Tower crashed out at the last flight of the Tattersalls Juvenile Hurdle.

Whether or not Aspire Tower would have won had he stood up can never be known but his fall was just one circumstance that conspired to hand JP McManus’s second-string A Wave To The Sea a Grade One victory.

Barry Geraghty reckoned at the last he was destined for third and it was McManus’s No 1 Cerberus who looked set to take advantage of the favourite’s exit. However, he tied up dramatically on the run-in and wound up only third as Wolf Prince also pounced in the closing stages.

“It looked like Cerberus was fighting with Aspire Tower out over the last and when he fell he just had a look up and probably saw the stands and everything and stopped in front,” said Joseph O’Brien after saddling the first and third. “I’m delighted we had A Wave to come and get him.”

Aspire Tower escaped unscathed and was lengthened to 8-1 for Cheltenham’s Triumph Hurdle.

O’Brien was just one of the giants of the training game to win on Sunday but there was also lucrative success for two of the comparative minnows.

Co Waterford-based Robert Widger has a just a handful of horses but one of them is Treacysenniscorthy who made it four wins from his last five starts in the William Fry Handicap Hurdle.

It was also a second weekend victory for claiming jockey Kevin Brouder, who scored on Saturday with Thosedaysaregone.

The Gaelic Plant Leopardstown Handicap Chase turned into a bookmakers benefit as the pair of 33-1 outsiders, Glamorgan Duke and Trainwreck, fought out a titanic finish.

Trainwreck, who carried 2lbs overweight, looked to have got the better of it in the closing stages but Conor Maxwell got a one final thrust out of Glamorgan Duke, who won for Co Galway trainer Paul Gilligan.

It was a first win at the course for Gilligan, whose faith in the horse was rewarded with a €150,000 race.

“He’s 17.3hh and I had the chance of selling him a few times. I possibly should have sold him but I said he’s too good to sell and he’d win a big pot some day,” Gilligan said.