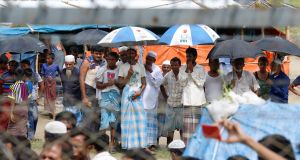 Rohingya refugees gather near the fence at the ‘no man’s land’ zone between the Bangladesh-Myanmar border. The first cases of coronavirus in the refugee camps have been reported. Photograph: Nyein Chan Naing/EPA

Aid groups have warned of a looming humanitarian disaster after coronavirus was detected for the first time in the sprawling camps that host about one million Rohingya refugees.

The camps in Cox’s Bazar, Bangladesh, which are more densely populated than some of the world’s busiest cities, have been under lockdown since March 14th, in an attempt to stop the virus from spreading.

On Thursday, the UN confirmed that an ethnic Rohingya refugee and another person had tested positive for Covid-19. “Both patients are in isolation and contact tracing is underway,” the UN’s refugee agency said in a statement.

Humanitarian groups fear the virus could race through the camps, where families live with up to 10 people in a room, often with limited access to basics such as soap and clean water. Households are forced to queue to access drinking water and food at communal distribution points, making social distancing impossible.

On top of overcrowding, many refugees, who fled persecution in Myanmar, have underlying health conditions or have not received standard immunisations, according to health experts.

The charity Médicins Sans Frontières warned that before Covid-19, around a third of patients it treated presented with respiratory tract symptoms, such as shortness of breath, meaning they are at higher risk of the disease. Health services for those who get sick is limited.

Health experts and Rohingya community leaders have become increasingly concerned as the number of coronavirus infections has continued to rise in Bangladesh, which has reported 18,863 cases of Covid-19 and 283 deaths.

Dr Shamim Jahan, Save the Children’s health director in Bangladesh, said in a statement the virus already had overwhelmed the country.

“There are only an estimated 2,000 ventilators in all of Bangladesh, serving a population of 160 million people. In the Rohingya refugee camps – home to nearly a million people – there are no intensive care beds at this moment,” he said.

“Now that the virus has entered the world’s largest refugee settlement in Cox’s Bazar we are looking at the very real prospect that thousands of people may die from Covid-19. This pandemic could set Bangladesh back by decades.”

Community members have volunteered to share information about the disease, but such awareness-raising activities have been hampered by an internet ban imposed on the camps, which means people are unable to access crucial public health information. Aid organisations have also been required to drastically cut back their presence in the settlements in order to reduce the risk of transmission.

The Burmese Rohingya Organisation UK said the international community needed to provide greater resources to protect Rohingya refugees, and called on the Bangladesh government to allow humanitarian work to continue in the camps.

“We urge Bangladesh to lift all restrictions on aid groups’ access to people who need them during the pandemic, and to take all necessary steps to prevent the virus from spreading further. The international community must step in and support Bangladesh in these vital efforts,” said Tun Khin, president of the group, who added that an internet ban, imposed by Bangladesh, should also be lifted.

“The Rohingya people in Cox’s Bazar have fled for their lives from Myanmar, where the government is waging a brutal genocide,” he said. “The world must now ensure that a disaster of epic proportions is avoided the camps where they have found safety.” – Guardian