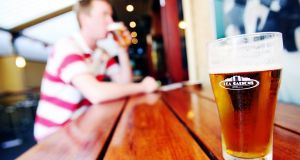 In many Australian states, there is either a 10 or 20 person limit on the number of customers allowed in a venue. Photograph: Fairfax Media via Getty Images via Getty Images

Seven weeks after the coronavirus pandemic forced Australia’s pubs to close, bars will take their first cautious steps towards reopening this weekend in a momentous moment for a nation of beer drinkers.

“The beers are here and the jobs are back,” said Michael Gunner, chief minister of Northern Territory, a region popularised by Crocodile Dundee, the beer-swilling hero played by Paul Hogan – a former face of Foster’s lager.

The Covid-19 shutdown hit hard in the Territory, where day-time temperatures rarely fall below 25 degrees and social life in rural communities typically revolves around a schooner, an Australian term for a 425ml glass of beer.

At the Noonamah Tavern, about 45km east of Darwin, people travel vast distances to grab a bite to eat, a few beers and catch up on the gossip, according to Tony Innes, the proprietor who also lays on rodeos near the bar.

“We are an integral part of the community and it’s fair to say a lot of locals are itching to get back in,” said Innes, whose bar reopened on Friday.

The hospitality industry has welcomed the lifting of closure orders in several states after just 14 new coronavirus cases were reported nationwide on Thursday.

But it warned that pub owners faced big challenges owing to the costs of closing while social distancing restrictions were in place.

Such rules have been relaxed in the Territory to allow drinkers to return to pubs for a maximum of two hours, as long as patrons remain 1.5m from the nearest person and order food.

But in many other states, there is either a 10 or 20 person limit on the number of customers allowed in a venue. South Australia and Victoria have decided not to reopen pubs yet.

Australian Venue Co, a hospitality group that owns 160 pubs and turns over A$600m (€357 million) a year, is reopening three pubs in Darwin on Friday and says it will struggle to make money in other states.

“A number of our Sydney pubs have a capacity of more than 1,000 but we will only be able to admit 10 people at a time,” said Paul Waterson, chief executive of the group, which is 80 per cent owned by KKR, the private equity firm.

Waterson said the group would begin a phased reopening and test innovations, such as enabling customers to order drinks from their tables via mobile phones, temperature checking staff before shifts and removing communal cutlery trays.

But smaller pub owners will find it difficult to pay off debts accumulated during the shutdown and have had to dispense of beer that was not consumed during the lockdown.

“A lot of people think we just closed our doors and walked away but there is rent, TV subscriptions, electricity and staff costs,” said Steven Speed, owner of Fortune of War, one of Sydney’s oldest pubs.

Very little of the beer in stock at Australia’s 6,000 pubs could be salvaged because it goes stale after five or six weeks. Lion, one of the country’s biggest breweries, refunded pubs A$25 million for beer they had in stock and has disposed of 90,000 kegs of unused beer, equivalent to 10.5 million schooners.

The Australian Hotels’ Association said Covid-19 threatened to accelerate structural change in the A$14.8bn industry, as a stay-at-home Netflix generation buys more off-licence sales and moves from drinking beer to wine and spirits.

Beer consumption has halved since the mid-1960s, when it accounted for three-quarters of alcohol drunk in Australia, government data show. Wine is now as popular, with both drinks grabbing 39 per cent market share.

“We are in danger of losing the social benefits of pubs, which are a key part of Australian culture,” said John Green, director of the Australian Hotels’ Association New South Wales, a lobby group.

“We are fearful some venues will never reopen after coronavirus.”

But as Innes began cleaning up after his first night reopening the bar, he said he was feeling positive.

“The pub trade is good in the Territory,” he said. “We had more than 100 people here tonight. There was a really good vibe and no one got silly. People were just so glad to get out.” – Copyright The Financial Times Limited 2020