HRI confirms there are no plans to expand 48-hour declarations 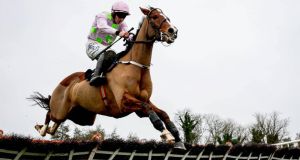 Officials are keeping their fingers crossed that Faugheen stays on course to be the headline act of the Dub;in Racing Festival. Photograph: Ryan Byrne/Inpho

There are 48-hour declarations for every race at this weekend’s Dublin Racing Festival but Horse Racing Ireland has confirmed there are no plans to expand the system of early declarations more generally.

Instead the 48-hour stage is being used for Leopardstown’s new two-day €1.5 million festival on a one-off basis like it is employed for the Irish Champions Weekend on the flat.

It means final declarations for Saturday’s BHP Irish Champion Hurdle card will be made on Thursday, just a couple of days after a forfeit stage that saw Faugheen top a nine-strong entry for the €150,000 highlight. Sunday’s cards will be declared as usual on Friday.

There have been regular calls over some time for 48-hour entries to be made much more common in Irish racing. However that has provoked strong opposition from many industry professionals.

This is a one-off for the Dublin Racing Festival and it is treating this weekend the same as Irish Champions Weekend and getting the Saturday out of the way early.

The Irish Racehorse Trainers Association spokesman Michael Grassick said on Tuesday: “We were aware of this and on a special occasion like this we don’t mind. We have had to declare earlier before, like at Christmas time, and for Group One races. It’s the day to day stuff we wouldn’t wish on ourselves.”

That prospect doesn’t seem likely to happen any time soon as HRI’s Director of Racing, Jason Morris, indicated on Tuesday.

“This is a one-off for the Dublin Racing Festival and it is treating this weekend the same as Irish Champions Weekend and getting the Saturday out of the way early.

“We also use 48-hour declarations for the Grade One races at the Punchestown festival but not the other races there.

“It’s one of those we’ve looked at in the past and no doubt may look at again in the future. But at this stage we are not looking at using 48-hour declarations on a regular basis,” Morris said.

Every race at the upcoming Cheltenham Festival in March will feature 48-hour declarations for the first time.

More immediately the complexion of the Irish Champion Hurdle could become more clear on Thursday with officials keeping their fingers crossed Faugheen stays on course to be the headline act of the weekend’s action.

The Christmas Grade One winner Road To Respect was missing from the 10 names still left in Sunday’s €200,000 Unibet Irish Gold Cup. That has left Our Duke as a clear 5-2 favourite in some lists.

However the betting picture on Saturday’s big race appeared to be a lot more turbulent after Tuesday’s forfeit sage with Faugheen’s stable companion Melon even challenging him for favouritism.

“Faugheen has been friendless in the market this week, with punters not yet ready to forgive him his disappointing last run,” one bookmaker spokesman said. “There’s every chance his younger stable-mate Melon could start favourite for Saturday’s race.”

The JP McManus-owned English raider Defi Du Seuil also shortened in price while the exciting novice Samcro still counts the Champion Hurdle among three weekend entries. Gigginstown Stud confirmed they would leave the unbeaten youngster in the senior race in case it “might break up”.

Samcro also features among entries for the first of the seven weekend Grade One’s, the Lacy Partners Novice Hurdle, as well as Sunday’s Deloitte Novice Hurdle over two miles.

Willie Mullins and Gordon Elliott have 40 Grade One entries between them for the weekend action and Mullins’s Footpad is a warm order for Saturday’s Ward Solicitors Arkle Trophy. Seven remain in the race with Footpad the only one not owned by either JP McManus or Michael O’Leary.

Defi Du Seuil and the Gold Cup hope Minella Rocco are the sole cross-channel Grade One hopes still in contention to travel to Leopardstown. Just nine British entries figure in the festival overall. Paddy Power make it 7-4 there will be a British trained winner.

Road To Respect will head straight to the Cheltenham Gold Cup after skipping this weekend’s action.

“He’s grand but the ground will be too soft for him. If it happened to come up the same as at Christmas he’d have run but it won’t,” said Gigginstown Stud’s spokesman, Eddie O’Leary.

The sponsors make Yorkhill an odds on shot for Saturday’s Grade Two Coral Dublin Chase. He is joined in the list of possible runners by his stable companion Min and that one’s Christmas conqueror, Simply Ned.