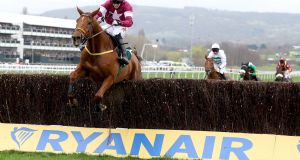 Road to Respect: “He’s in the mix but it will be ground dependant . . . If it’s too soft he’ll go straight to Cheltenham,” said Eddie O’Leary. Photograph: Dan Sheridan/Inpho

Michael O’Leary is odds-on to be leading owner at this weekend’s inaugural ‘Dublin Racing Festival’ but ground conditions will dictate if Road To Respect leads his Gigginstown Stud team into the featured Unibet Irish Gold Cup.

Road To Respect jumped to the forefront of the Cheltenham Gold Cup market when leading a Gigginstown rout in the Leopardstown Christmas Chase almost five weeks ago.

The Noel Meade-trained star beat Balko Des Flos and Outlander on that occasion and is a 7-2 joint-favourite with Our Duke in most lists for this Sunday’s race.

But, although Outlander will return to the course and distance for the €200,000 centrepiece of Irish jump racing’s new €1.5 million shop-window event, plans remain less clear for Road To Respect.

“He’s in the mix but it will be ground dependant with Road To Respect. If it’s too soft he’ll go straight to Cheltenham. We won’t abuse him. Outlander will run. So will Valseur Lido and we’ll see about Road To Respect later in the week,” said the Gigginstown spokesman, Eddie O’Leary, on Monday.

The crucial five-day stage for this weekend’s lucrative action takes place on Tuesday although the Leopardstown chief executive Pat Keogh indicated the going at the track is currently soft.

“The forecast isn’t bad. There’s a bit of drying. There’s also some rain but maybe not more than 10mms during the week. I wouldn’t see a huge amount of change to the ground,” he said.

One of the prime attractions at the new festival is a likely appearance by Gigginstown’s exciting unbeaten novice Samcro who holds a number of entries over the two days.

Eddie O’Leary appeared to rule out a tilt at the two-mile Deloitte Novice Hurdle on Sunday however.

“It’s between that race [the Lacy & Partners Hurdle] and the Champion Hurdle, depending on how that might break up,” he said.

O’Leary also stressed that Gigginstown – an 8-11 favourite with Powers to be leading owner based on prizemoney over the weekend – are keen to support the new festival project.

The last race at Leopardstown on Saturday is scheduled to start at 4.05, just 40 minutes before the start of the France-Ireland Six Nations rugby game.

“They’re very lucky the Six Nations match is in Paris, and with the kick-off. They’re lucky that’s the way it is this year. The concept, I hope, works well. For Leopardstown I hope it works. It worked great on the flat [Irish Champions Weekend) and hopefully it’s the same over jumps,” O’Leary said.

One of the most eagerly anticipated clashes on Day One will be the meeting of the star novices Footpad and Petit Mouchoir in the Grade One Ward Solicitors Arkle.

Petit Mouchoir beat Footpad by a length in last season’s Irish Champion Hurdle but hasn’t been seen in action since winning his first start over fences in October. He subsequently suffered a joint injury.

“Hopefully he’ll run but he’s been trained for Cheltenham rather than here. He’s missed a lot but needs more experience so we’ll see how he goes,” Eddie O’Leary added.

He also indicated Cheltenham’s Ryanair Chase will be the next race for Balko Des Flos which means the Christmas runner-up will miss out on the Irish Gold Cup.

Willie Mullins is targeting a tenth victory in the race formerly known as the Hennessy and has both Djakadam and the unexposed Killultagh Vic lined up to run in it. Killultagh Vic is facing just his third start over fences having returned from almost two years on the sidelines with a hurdles success at Punchestown on New Year’s Eve.

His last start race over fences saw him secure a dramatic Grade Two novice success at Leopardstown, rallying to win after sprawling badly at the final obstacle.