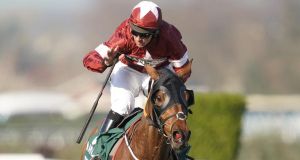 The option of advising that Irish-trained horses not travel overseas to race hasn’t been ruled out by Horse Racing Ireland.

Racing here continues to take place behind closed doors as part of Government restrictions on outdoor gatherings of more than 500 people which apply until March 29th.

That deadline is widely expected to be extended due to the coronavirus pandemic which has seen much of public life, including most sporting events, either shut down or restricted.

Less than a week after the March 29th deadline sees the beginning of Aintree’s Randox Grand National festival in Liverpool.

That normally brings over 150,000 racegoers over the three days, including many Irish visitors.

British racing continues to be an exception in allowing the public to keep going racing, although new restrictions on mass gatherings in Britain – potentially allowing racing to continue behind closed doors – are expected to be announced later this week.

However, there has been a massive public backlash to how over quarter of a million racegoers attended last week’s Cheltenham festival.

That included the Minister for Foreign Affairs, Simon Coveney, saying that if Cheltenham was held in Ireland it wouldn’t have been allowed go ahead.

With widespread fears about the spread of Covid-19, the Irish Government has advised people to think carefully about travelling to other European countries and issued restrictions on travel to Italy and Spain.

It means the prospect of Irish-trained horses, and those connected to them, travelling to Liverpool for the Grand National could be contentious in the context of widespread criticism of what occurred in Cheltenham.

Horse Racing Ireland has underlined how it will be guided by Government advice in relation to all matter related to Covid-19.

However, when asked if the racing industry here could take the initiative and ask owners and trainers not to travel to Aintree, HRI’s chief executive Brian Kavanagh adopted a cautious position.

“There are different categories of people. Some people choose to go. Some people have to go. I’m certain we will do the right thing and we will take advice from Government and our recommendation will follow that advice of encouraging people to act responsibly.

“We will take stock of the situation over the course of this week and see how we go.

“I don’t know if schools will reopen on March 29th or whether all those cultural institutions will reopen, so the ban on 500 people will be lifted. At this stage you’d have to say it’s probably unlikely.

“But that’s over a fortnight away and things moved rapidly last week on a daily basis. So it’s very hard to be prescriptive. We will be encouraging people to do the right thing in accordance with government guidelines.”

There has been widespread criticism of racing fans in Ireland who travelled to Cheltenham and returned home over the weekend due to fears of the coronavirus infection spreading further.

Horses trained here were also in action in Britain over the weekend and other Irish-trained runners hold entries for cross-channel races prior to Aintree including in Saturday week’s Lincoln Handicap at Doncaster.

Kavanagh conceded on Sunday that the Grand National is at the back of everyone’s mind in racing.

Pressed about whether HRI had plans to issue a request for Irish horses not to travel he said: “Not at the moment. It may come to that and it may not, I don’t know.

“It would be wrong to take that call at the moment and then find circumstances had change for the better or worse and have to take stock at that point.”